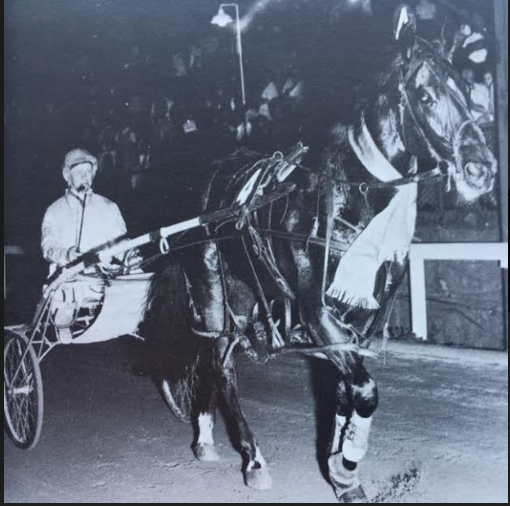 “Without doubt, the champion pacer of Australia”, Hall of Famer and Legend George Gath, August 1967.

“One of the greatest classic winners ever in Australia”, Hall of Famer Bruce Skeggs, Trotting Register, April 1968.

A 1960 colt by Meadow Vance (Imp) from the champion mare Argent was bred by Harry and Frank Abrahams at their Meadowbrook Stud, Woodend.

Trained by Jack McKay, and driven predominantly by George Gath, Gyro raced from age 2 to 9, but started only 45 times as he was plagued by injury. Gyro won 20 of those starts. He started odds-on in 15 of his first 16 of them.

At 2yo, Gyro, won the heat and final of the Victorian Sapling Stakes at the Royal Melbourne Showgrounds.

He was then spelled for 17 months. Gyro made a successful comeback as a 5yo. From 7 starts he won 4 including the A.A. Laidlaw Cup at Stawell, with 3 seconds.

He again broke down and made another comeback in 1968 starting 15 times for 11 placings including winning his last 4. In his second last start Gyro won the 14 furlong (2800 m) Italian Cup off 24 yards behind.