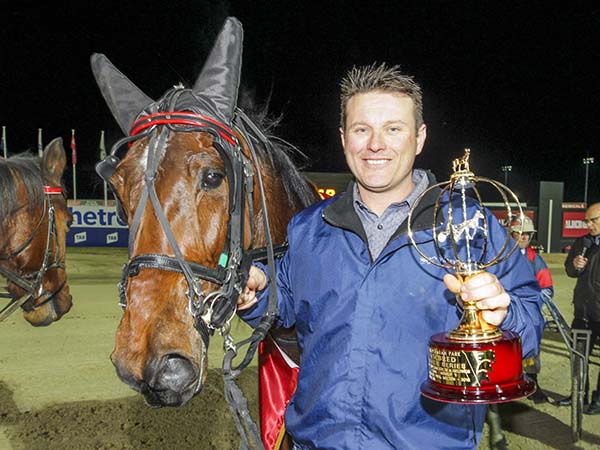 An enormous day awaits for Anton Golino at Maryborough tomorrow, one which offers great hope but the ever-present threat of trotting heartbreak, with his Yabby Dam Racing stable presenting 15 in TAB Breeders Crown heats.

While safe progression through to the August 24 finals at Tabcorp Park Melton is the primary aim, Golino is hopeful a few of his well-bred Pat Driscoll-owned trotters will confirm their contender status.

And the Ballarat trainer said there was also opportunity for some, like Aldebaran Park two-year-old colts and geldings' contestant Avimore, to finally show their true colours.

"To be honest, (Avimore's) probably one of the better ones of mine on ability," Golino told the Inside Word podcast.

But owing to manners ability hadn't yet transformed into race performance, having finished seventh or eighth in his four starts when he's either broken gait, started poorly or tailed off.

"I think he will be OK," Golino said. "We have changed a few little things on him and I had a look at the gate the other day with him and he seemed to be quite good. Just get him out the gate and after that he should be fine."

Avimore is one of three runners Golino has in the class, sharing the second heat with stablemate Gun Slinger, who will start from inside the back row in and "will need luck" but is "a nice colt".

"Hopefully we can get no bad luck and he can get through and qualified and draw a bit better in the final," Golino said.

Avimore is listed a $41 chance with TAB.com.au and Gun Slinger at $6.

The other Yabby Dam runner, Quake Proof, is in the first heat, where he's listed a $41 shot in a market dominated by Redwood Classic winner Ultimate Stride.

"He was a little bit of a handful there early and we had to drive him (so) he wouldn't get too revvy, a couple of times he showed us that he could get home real good," Golino said.

"If he's handy enough, he will be there amongst them. He's a pretty nice horse, that said, I think next season he will be a real good horse."

INSIDE WORD: CLICK BELOW TO HEAR ANTON GOLINO'S RUNNER-BY-RUNNER PREVIEW