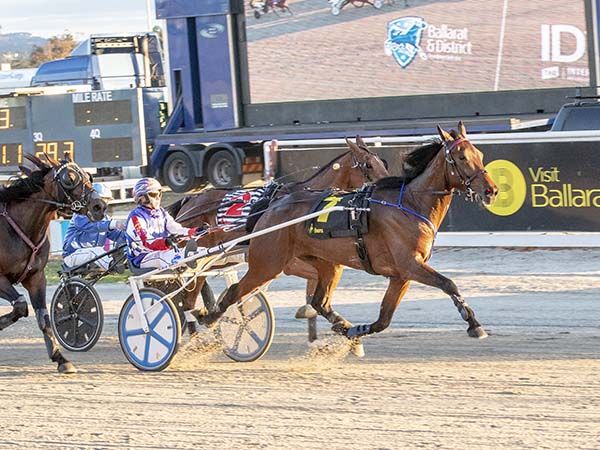 Every point matters in the TAB Inter Dominion trotting championship and form analyst Blake Redden has broken it down horse-by-horse after two heats of ID18.

In addition to detailing the official points score, which can be viewed by clicking here, Redden has given each runner a race-by-race rating.

Night 1: 9/10 – Copped pressure through the third quarter and was still trucking on the line

Night 2: 8.5/10 – Flexed his muscle after the start and dictated thereafter.

Night 1: 8/10 – He got a pretty soft time through the middle stages but he staved off a pretty serious challenge from Maori Law and was well clear late.

Night 2: 8/10 – Didn’t find the pegs but brave as ever from the breeze. It’s hard to knock his form as the key danger to the favourite right now.

Night 1: 9/10 – Came into this second-up from a break and loomed the winner on the bend, magical effort.

Night 2: 8/10 – Had to be driven hard after the start but held the leader's back and produced a most similar run as Night 1 over what probably isn’t his best trip.

Night 2: 8/10 – Ran the gate and landed a lovely spot in the one by one. Looked the winner half way up the straight but his first genuine crack at this level from off the pegs and he stood up.

Night 1: 4/10 – He was off the bit a long way out and despite trying to rally late he just didn’t come on as expected.

Night 2: 9/10 – Phenomenal is just about the only way to describe his performance. Chris Alford take a bow, sliced through the field and came with his customary turn of speed.

Night 1: 6.5/10 – You will find varying opinions on how good this guy’s run was, I wasn’t as taken as some others but he did work to the breeze and apply the pressure to the leader.

Night 2: 7/10 – Came wide on the track and was still finding the line at the end. A nice run to keep him ticking over.

Night 2: 5.5/10 – Off the pegs this time and did run the gate. Not many made ground and while she got a touch tired late, the run was still sound.

Night 1: 7.5/10 – Superb effort from this girl to make ground wide on the track. She didn’t get heaps of points but it sets her up for a nice series.

Night 2: 7.5/10 – Used her gate speed to full effect before landing behind the speed, just halted for momentum early in the straight and she didn’t shirk the task late.

Night 2: 7/10 – Was handled beautifully by Kate Gath and he was just struggling to get a full crack at the sprint lane for a stride or two so he has put in another super run.

Night 1: 7/10 – Sat parked and lifted when beaten so a pretty nice effort all things considered.

Night 2: 7/10 – He was forced to start the three-wide train and he loomed dangerously halfway up the lane. Another very nice effort.

Night 1: 6.5/10 – Was forced to come wide in the track and not many horses made ground out wide all night so there’s merit to her run.

Night 2: 6.5/10 – Was afforded a pegline run and given the slick last quarter she did as much as possible, she just keeps hanging in there.

Night 1: 8.5/10 – Worked early, went back and then launched with an almighty run at the 800m. He did get tired late but the run was sensational given he will have improvement.

Night 1: 5/10 – She got further back than expected on the pegs but just a middling effort

Night 2: 6/10 – Played for luck in between horses and she was poking through late, trending in the right direction at least.

Night 1: 6/10 – This fella didn’t have much luck late and could have finished a touch closer.

Night 2: 7.5/10 – Worked the breeze and not the worst place to be over the sprint but still went massive to finish where he did.

Night 1: 4.5/10 – Didn’t have the clearest of passages at a crucial stage and finished off quite OK.

Night 2: 6/10 – Unsuited by the distance but he didn’t lose the back of Tough Monarch in the lane so there are signs he is starting to turn it around.

Night 1: 5/10 – Had a soft run and probably just held his ground more than made any late.

Night 2: 6/10 – Hard to know what to make of this run. Galloped early but was flashing to the line albeit well beaten. Definitely some merit to the run but he needs points to qualify.

Night 1: 3.5/10 – Was forced to lead the three-wide train so while you can be somewhat forgiving, he was never in the race.

Night 1: 6/10 – Another that had no luck in the lane, it’s best to forgive his run completely.

Night 2: 3/10 – Had every chance after finding the front and probably just not at his best.

Night 1: 6/10 – Another forced to come wide on the track and while he wasn’t rewarded via points, he ran quite well.

Night 2: 5/10 – It was always going to be hard for him from the draw and the sprint trip didn’t suit so he gets a pass mark.

Night 2: 6/10 – Many horses went about as well as each other in a blanket finish but driven more quietly he was hitting the line pretty strongly.

Night 1: 3/10 – He was wide on the track but remained at the tail throughout.

Night 2: 3/10 – Similar to his first run in this series, hard to see him getting involved from here.