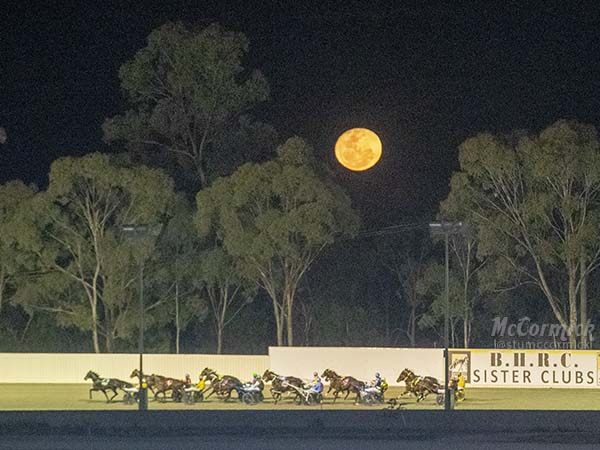 The stage has been set for a thrilling TAB Breeders Crown finals night at Tabcorp Park Melton on August 24, with the field narrowing tonight at Bendigo and some new contenders emerging.

It was all action at Lord's Raceway with not only the two and three-year-old pacing heats, but the draws for the pacing and trotting finals to keep tongues wagging.

Here's how all the action unfolded on one of the great night's on the Victorian trots calendar. 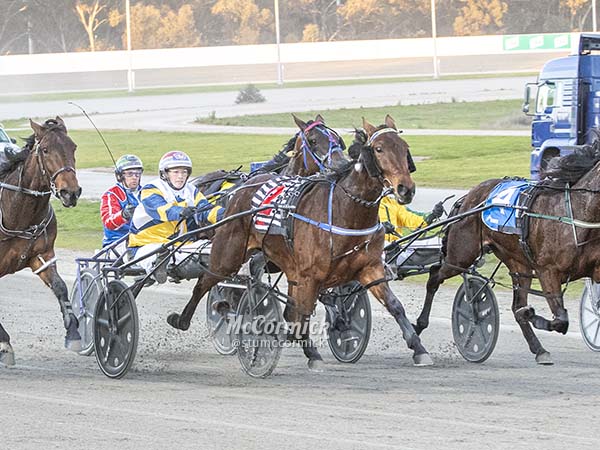 The punters take the honours in race one as Amelia Rose, who opened at $13 and was backed into $3.80, swept to the front to win for trainer Emma Stewart and reinswoman Amanda Turnbull.

The victory came despite plan A having been thrown out early in the race when Rockingwithsierra was able to initially hold out Amelia Rose before taking the prized leader's back position when frontrunner Jemstone emerged.

But sit-sprinter Amelia Rose soon found cover in the running line behind Michael Stanley's Iolanta and then emerged at the top of the final straight to show her customary high speed, winning by a neck from second-placed Alice Kay with Stewart stablemates Treasure and Jemstone filling out the first four in a very even division.

Joining that quartet in the final will be Rockingwithsierra (fifth) and Jo Dina (sixth). 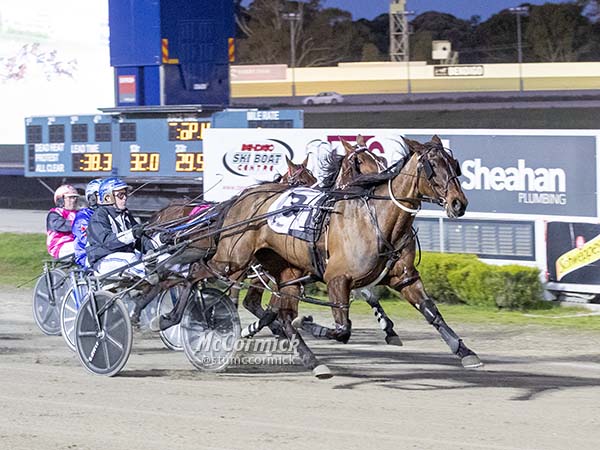 David Moran slid Ahmed Taiba's Our Road To Mecca to the front and controlled proceedings, copping little heat before a 27.2 final quarter secured the semi-final win.

"She was a bit funny last week," Moran said in regards to Our Road To Mecca failing to score up at the gates in her heat. "He put the plugs in her for the first time and she just tended to go to sleep a bit too much going up to the gates. Freddy and the boys left them out tonight and she was a lot sharper and she run a pretty good race."

Tonight Our Road To Mecca comfortably crossed to the front and got a breather with a 32-second first quarter.

"She's got that good early gate speed," Moran said. "Generally the mile seemed to be her go, but she seems to toughened up a bit more now and she's adjusting to that racing going around against those better fillies through some of them classic races. It's probably done her the world of good.

"She's shown she's right up to them, just reliant on that little bit of luck. Tonight with the draw she was able to get the lead early and dictate from there."

She was unchallenged in the straight, with Buzinga (leader's back) finishing second, 2.3 metres in arrears, and Enchanted Stride just pipping Looking Fabulous for third. They advance to the final along with Myra Dawn (fifth) and Millah Joy (sixth). 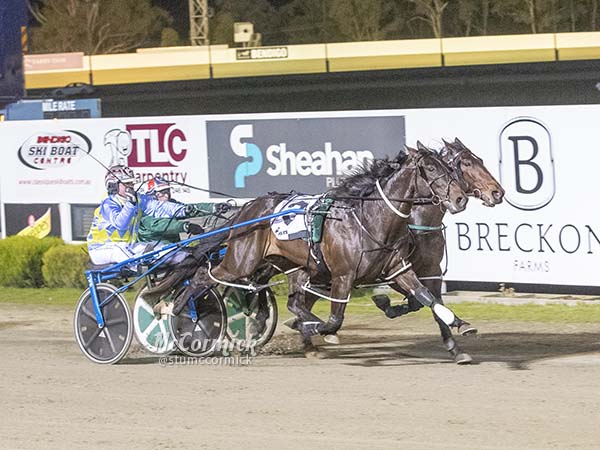 There was perhaps a little heart flutter late when Star Hunter threatened, but Perfect Stride got the job done having cruised to the front and swept his way into the TAB Breeders Crown finals.

A $190,000 sales topper for owners Emilio and Maria Rosati, the little full-brother to Chicago Bull confirmed his favourite status in the run when he strode to the front for reinsman Anthony Butt and then did just enough late to register victory by a head.

"He's a pretty casual little guy," Butt told TrotsVision. "Lovely horse to drive, but the boys did say he can wait for them a bit in front. That's what he did, he felt good turning for home and then he thought it was all over. He's learning all the time and I'm sure next week will be a different story.

"He's been well trained by Ray (Green) and well educated, he's just like an old horse to drive. He come off the gate fast and just relaxed and dropped the bit and goes as fast as you want him to go. For a two-year-old he's got beautiful manners. I'm sure next week with a decent draw he won't be out of it."

Green told TrotsVision that even better was yet to come from the beautifully bred two-year-old.

"He's much better coming off the pace. He's probably better than (those times), had he been coming from off the pace he would have finished a lot better. He's a loafer."

Joining the winner and second-placed Star Hunter in advancing to the final were Do Not Surrender (third), Focus Stride (fourth), Saint Emillion (fifth) and Santa Casa Beach (sixth).

Draw for Aldebaran Park 2YO trotting colts and geldings' final 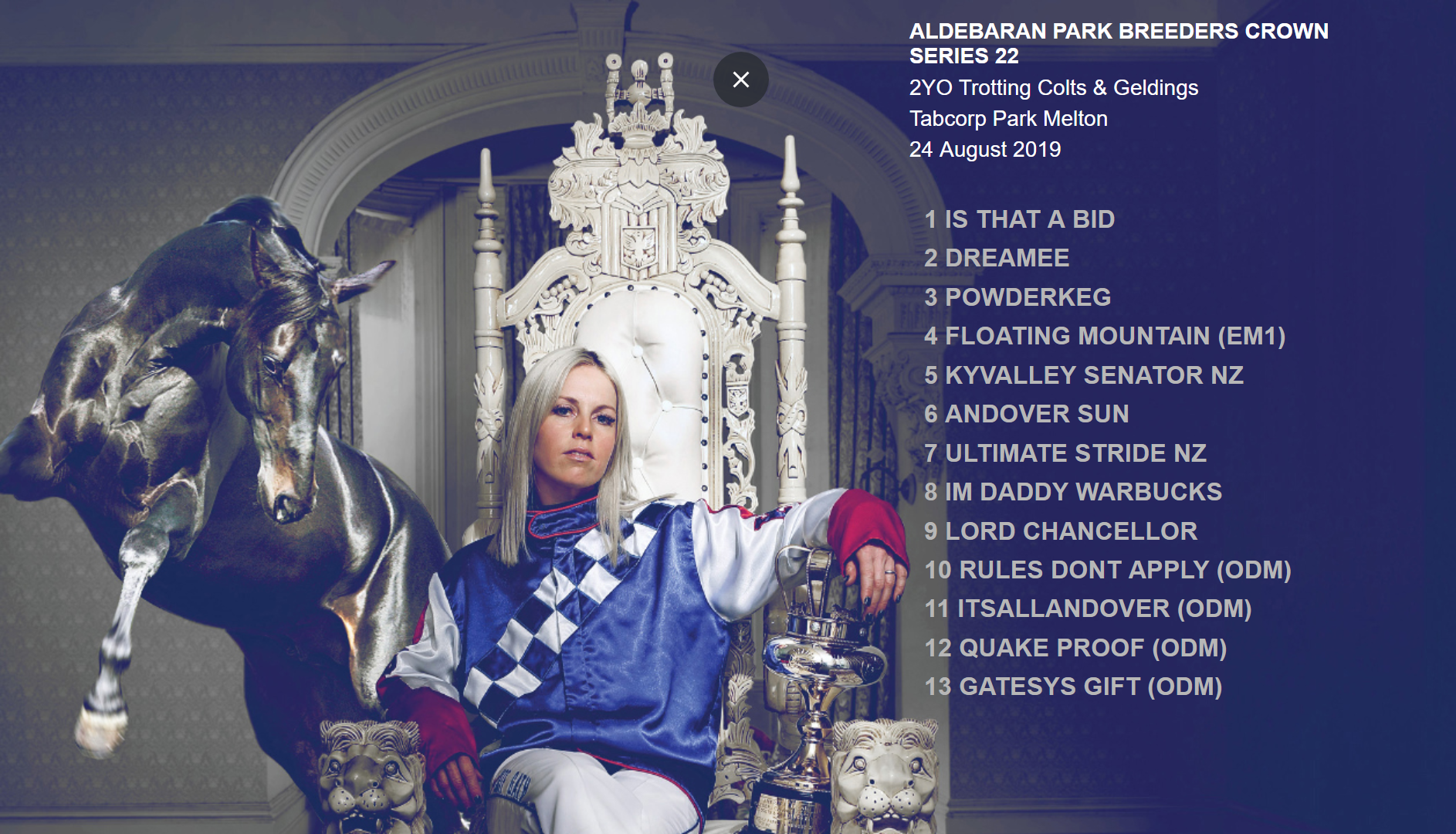 Maajida wins the Always B Miki 2YO fillies' second semi-final 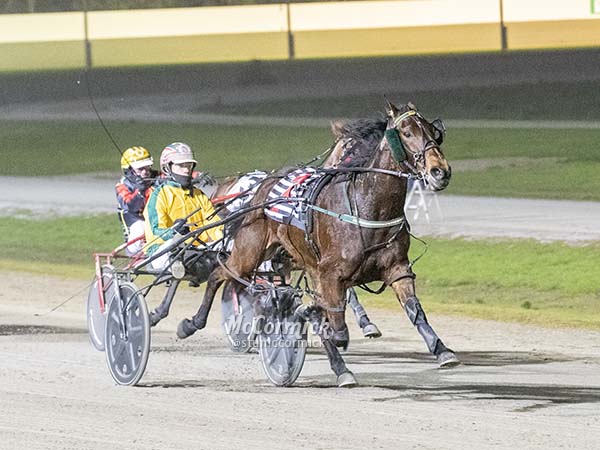 She was a $1.04 job and she looked every bit of it throughout as Maajida dominated her two-year-old fillies' heat for trainer Emma Stewart and reinsman Greg Sugars, who showed patience in working to the front and then cruised to a five-metre win.

"It's one thing about her, she gives you a lot of confidence as a driver this little horse because she's certainly not one dimensional by any stretch of the imagination," Sugars told TrotsVision. "She's shown her last two runs that off steady sectionals she can dash up a pretty sharp quarter if need be, like she showed in the Vicbred final when she drew an outside back row gate, circled the field and was too strong.

"She's got plenty of courage about her as well. Just lovely to drive. She's quite casual in front, but it doesn't take much to wake her up and ask her to go and she responds for you. Just a pleasure to drive and I'm the lucky one who gets to sit behind her at the moment."

Having initially crossed to the front, Michelle Lee Mac ran into second place with Starsbythebeach filling out the placings. Top six runners Askmeilltellya, The Pantheist and Final Peace, who did plenty of work in the breeze, also advanced to the August 24 final at Tabcorp Park Melton. 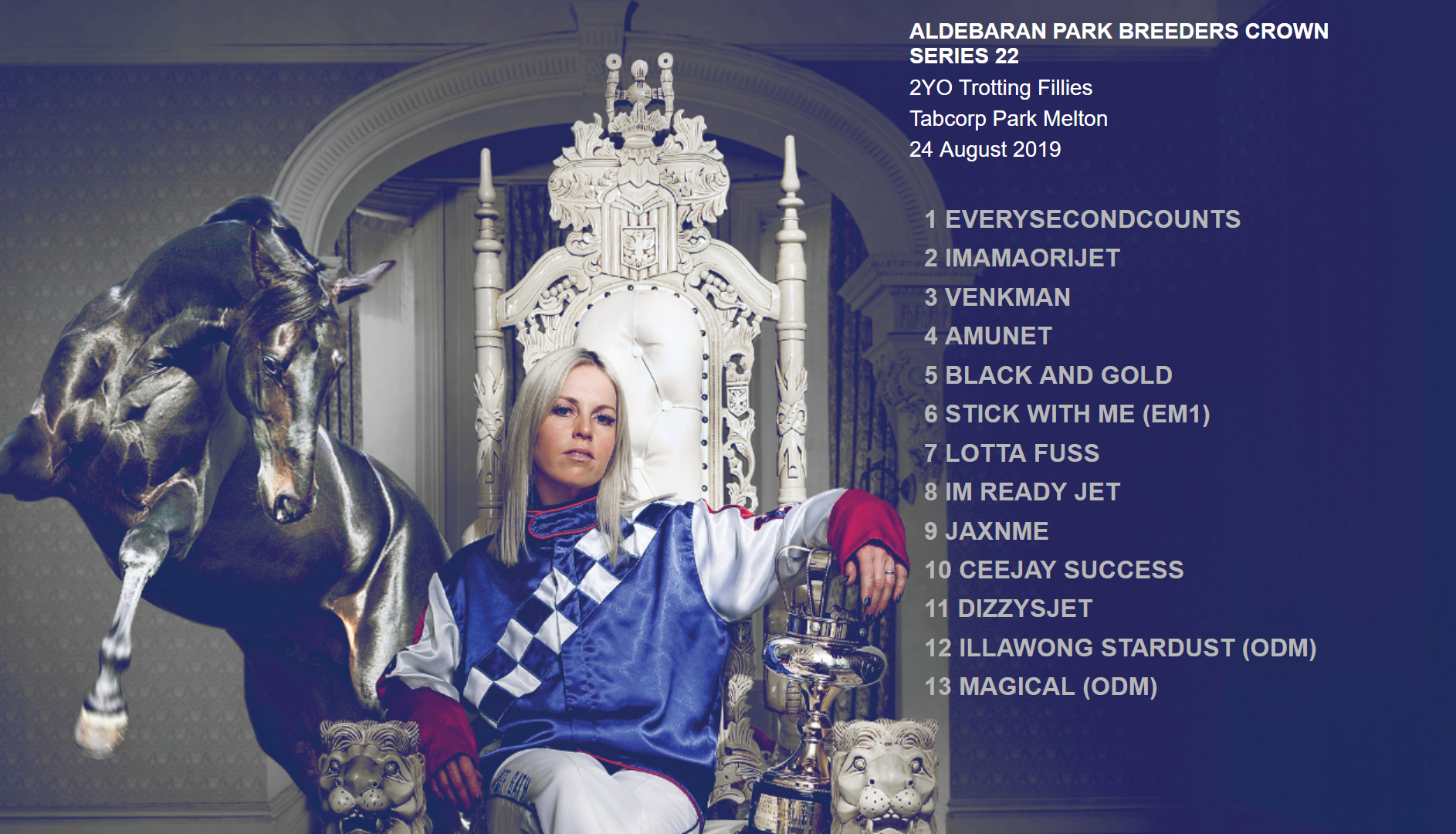 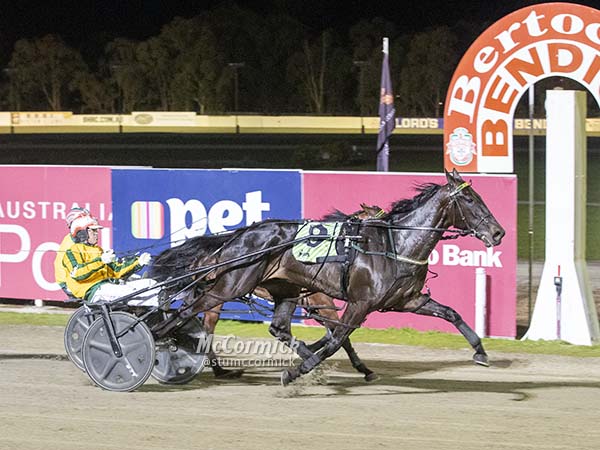 It was a good race and it was won by a very good horse as Be Happy Mach notched up victory number nine from 10 starts for reinsman Chris Alford and trainer Emma Stewart, despite having to again advance from the second row.

There was plenty of work early as a number of horses shuffled forward in the running line to be near the front of affairs including Youaremy Sunshine, who was four-wide for some time before settling in the breeze.

Be Happy Mach cruised on by to move straight to the front ahead of Mirragon and Zeuss Bromac who were one, two and three on the pegs and that was how they'd finish, with talented types Youaremy Sunshine, Sahara Sirocco and Pacifico Dream finishing fourth, fifth and sixth to keep their TAB Breeders Crown dreams alive.

Be Happy Mach rolled home in 26.9 seconds to finish 1.6 metres clear of his stablemate and to reaffirm his almost iron clad favourtism for the final, with the draw to take place after tonight's seventh race. Stay tuned. 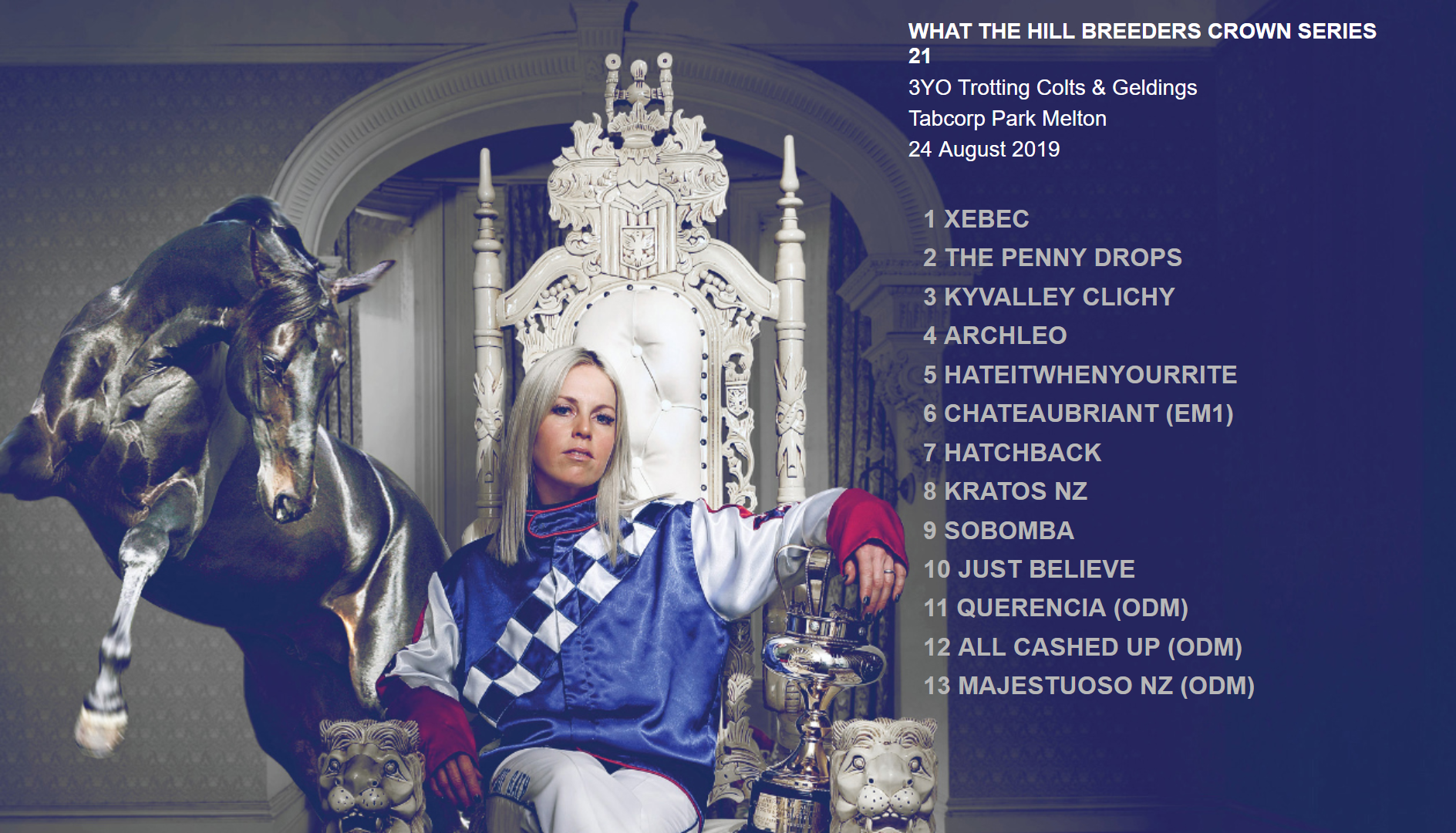 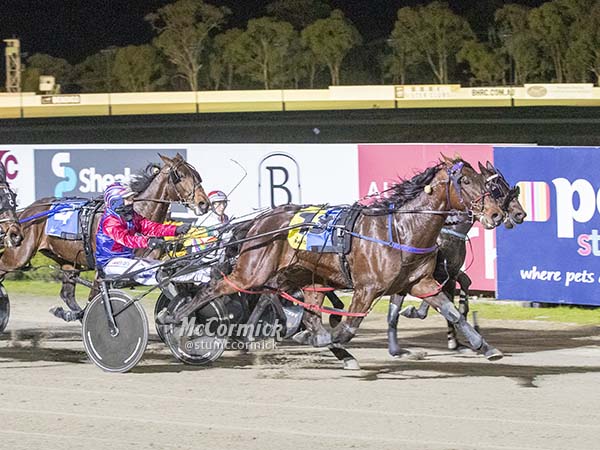 "How good was it - he's so fast," said reinswoman Kate Gath of Demon Delight after the Emma Stewart trained three-year-old put in a pulsating performance in the showcase race of the night, which lived up to high expectations.

There was plenty going on, with Brevity surprising in holding out Max Delight early, Hurricane Harley lobbing to one-out one-back and then Jesse Duke taking the breeze as the big guns settled on the running line.

A 37.8-second lead time preceded 29.5 and 29.6-second quarters at which stage Gath guided Demon Delight three-wide from the back of the field, advancing until Hurricane Harley popped into her path and provided cover.

But last week's brilliant heat winner didn't have it in him tonight and at the turn Demon Delight peeled four-wide while well fancied Hurricane Harley and All Stars entrant Jesse Duke faded out of contention.

Despite doing his fair share of work Demon Delight mowed down all comers to win by 1.7 metres from stablemate Brevity amid a 55.1-second last 800m, with Catch A Moment and Crime Writer hitting the line well to run third and fourth. Max Delight (fifth) and Always Fast (sixth) also qualified for the final. 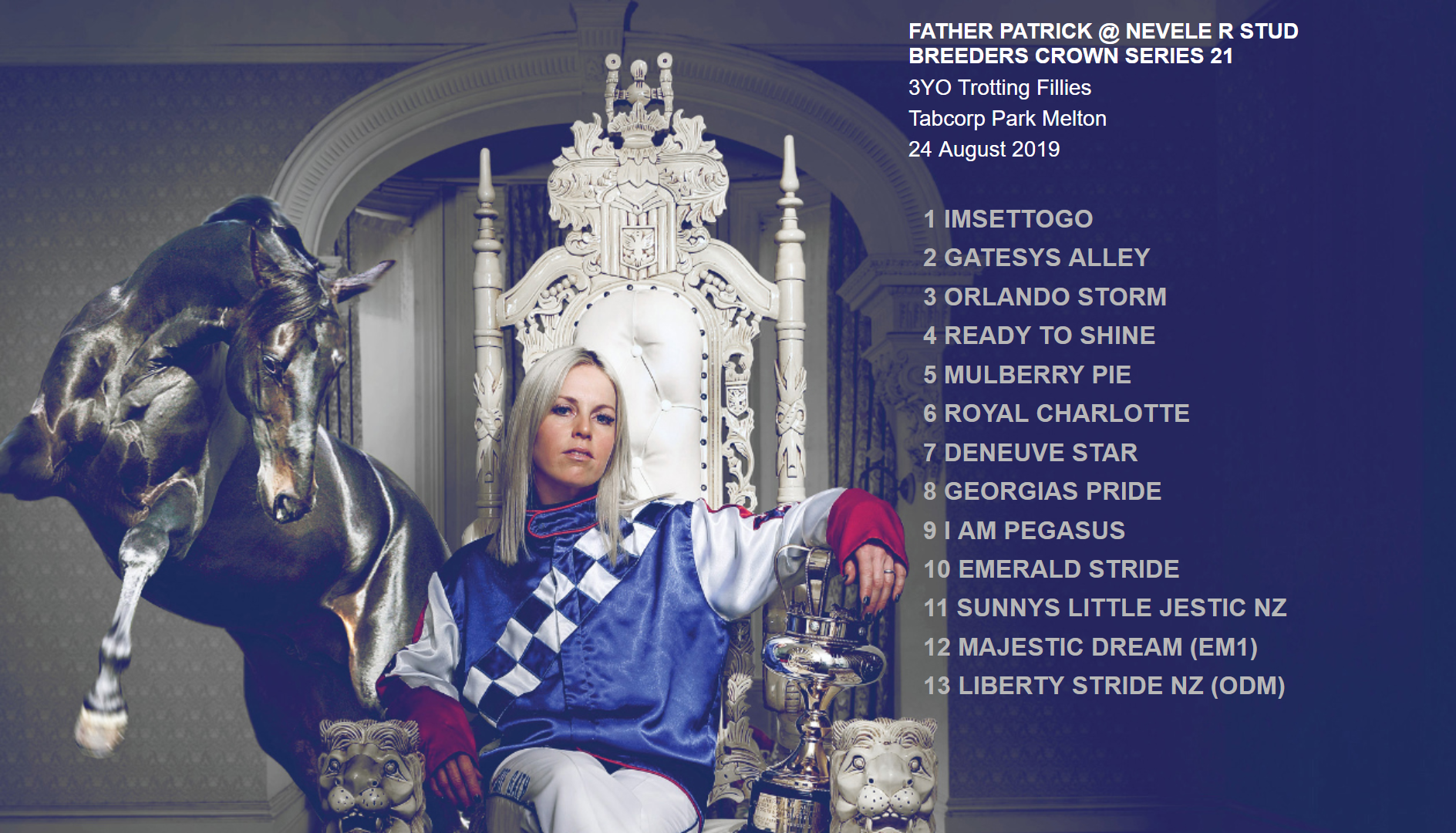 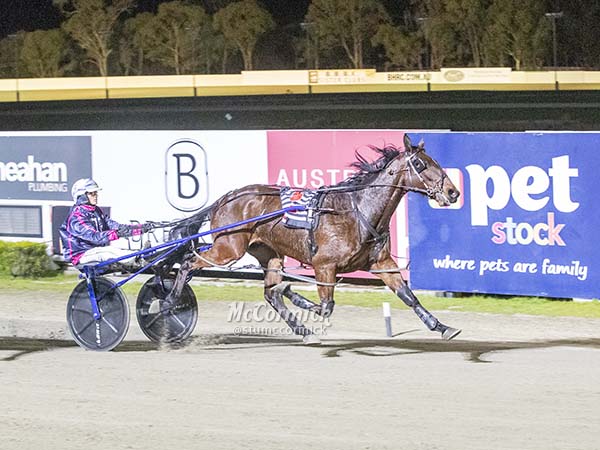 Malcolms Rhythm shows he's got a few strings to his bow, grabbing and holding the lead before going all-the-way for reinswoman Kima Frenning and trainer David Aiken.

The NSW Derby placegetter has mixed it with the best for much of his young career and tonight he showed he could sit inside one of the three-year-old class's toughest competitors, Lochinvar Art, take a few punches and still have plenty left in the finish.

Malcolms Rhythm got home in a brisk 26.8-second final quarter off a 28.6-second third quarter to win by 2.6 metres from Lochinvar Art, who placed for a staggering 27th time from as many starts, including a sixth successive second placing.

Pitch Perfect ran third with Out To Play (fourth), Fides (fifth) and Revolt (sixth) also advancing to the final. 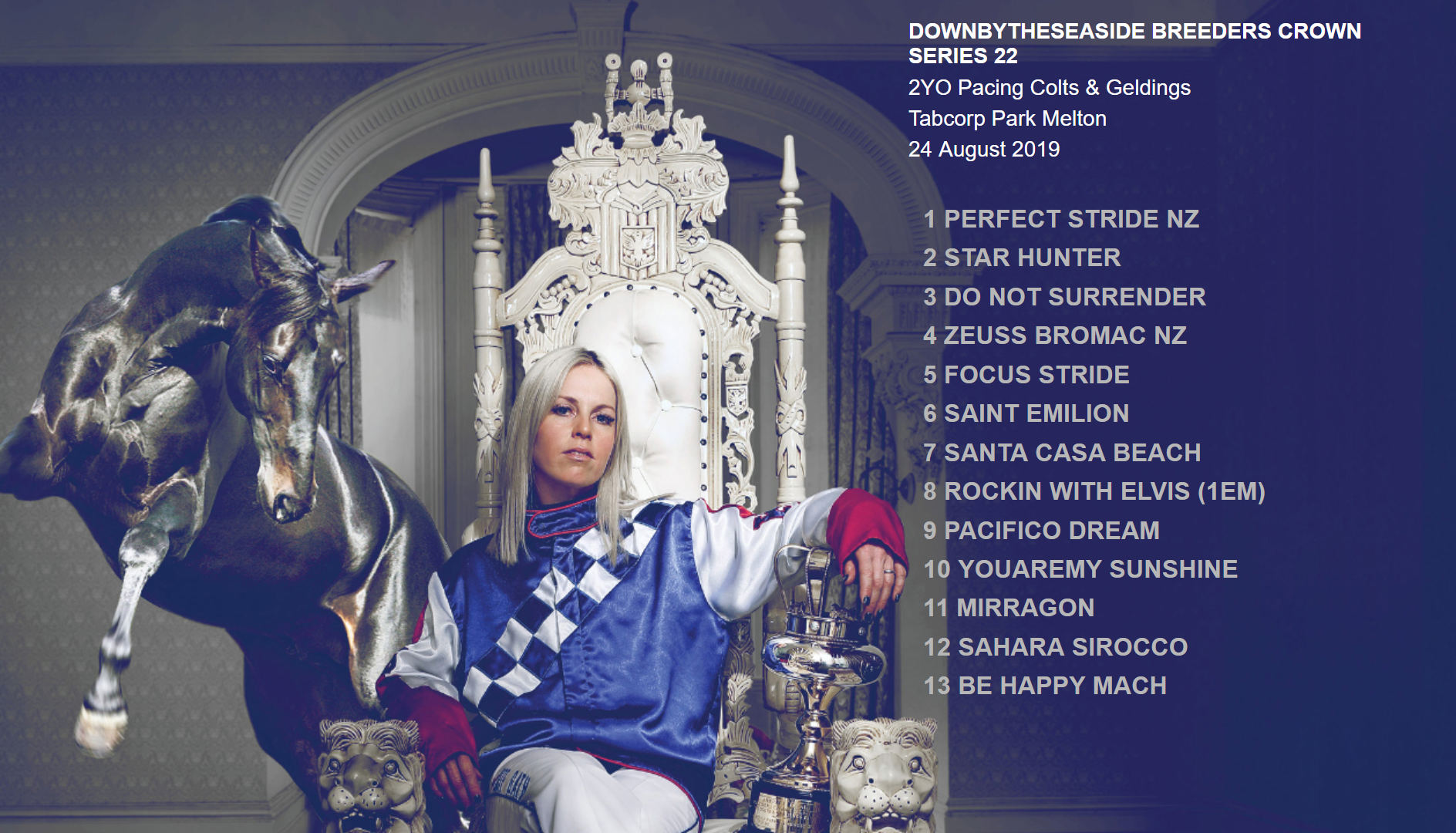 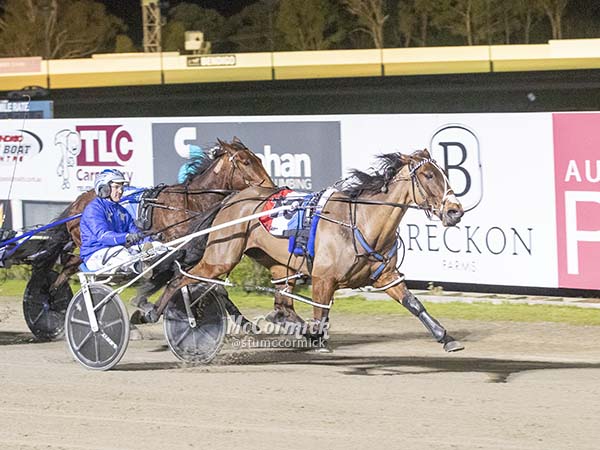 The hiccups of Kilmore's heat failure are now firmly in the rear-view for Our Princess Tiffany, who edged closer to the brilliance for which she's renowned in winning her semi-final.

Reinsman Luke McCarthy, who's guiding the All Stars filly until Mark Purdon lobs across the Tasman next week, said "she didn't handle the track, it was really wet" at Kilmore and was rapt to see her return to something like her best.

"Mark put in the media that they had done blood tests and were happy with her, so we were able to drive her confident and she felt super tonight," McCarthy said.

"I thought if I could get in front of Kate (Gath on Two Times Bettor) early that would be the best tactic and got a good run through and sort of was able to control the tempo and she ran super."

She advanced three wide early and got home in quarters of 28.3 and 27 seconds to win by three metres ahead of No Win No Feed, with third-placed Best Western 5.4 metres back.

"She's a champion filly and had an outstanding season and it was just good to see her bounce back to her best tonight." 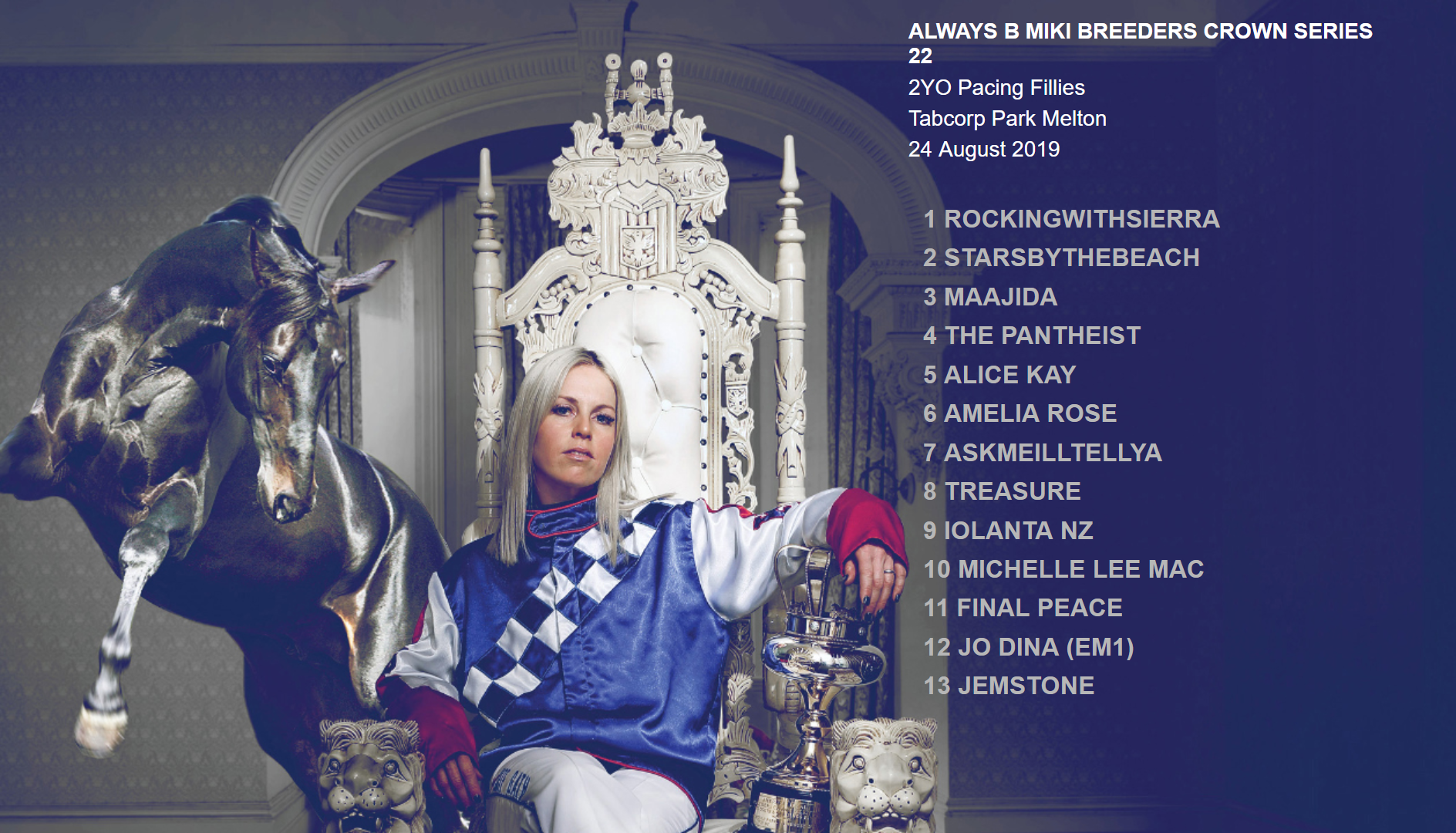 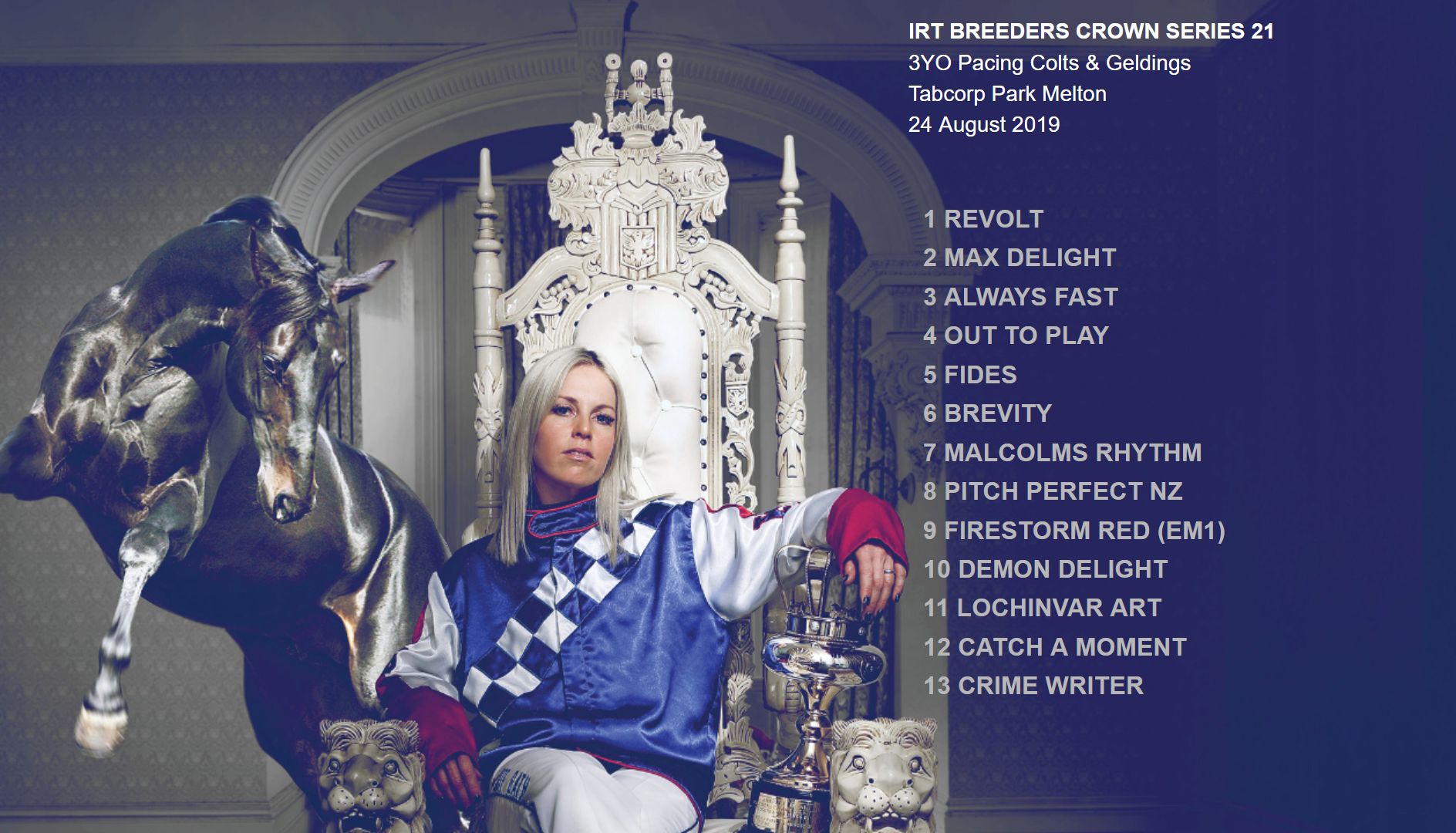