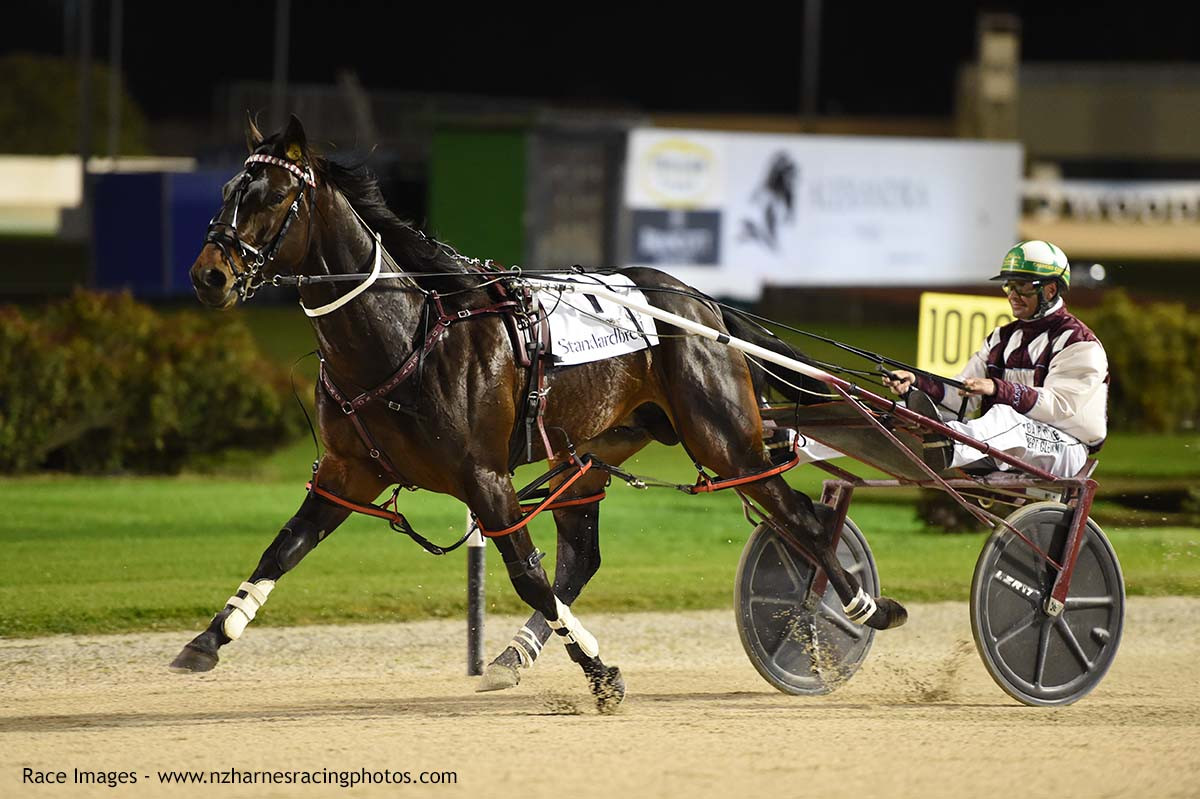 Cran Dalgety’s attitude to Krug drawing the outside of the front in tonight’s $200,000 Diamond Creek Farm NZ Derby is refreshingly simple.

“As long as he didn’t draw the inside of the second line I was going to be happy,” says Dalgety.

While some might argue barrier nine, which will become eight with the emergencies out, isn’t much better Dalgety says he has the horse power to handle it.

“I see mainly positives from there,” he said. “At least out there he is master of his own destiny and he probably can’t find bad luck. So if he is good enough he can still win.”

Krug has already shown he can do freakish things when in the zone as we all saw in the Northern Derby when he half bolted on Tony Herlihy but still smashed his opponents.

It is a similar field tonight and key rivals like Ragazzo Mach and American Dealer have drawn the second line but there is still plenty of gate speed in B D Joe (4), It’s All About Faith (5) and Shan Noble (8) between Krug and the marker pegs which is where so many Derby winners come.

Dalgety says he won’t be giving Blair Orange any driving instructions but with six horses drawn behind him on the second line he would envisage Orange won’t be pulling back.

So can Krug work for maybe the first 800m and win the Derby?

“I think he can because he is better than when he won the Flying Stakes two weeks ago,” says Dalgety matter of factly.

“I always expected he would be because I eased off him after his Derby win up in Auckland and he was going to improve on what he did after the Flying Stakes.

“But I am surprised how much he has improved. His work on Monday was at another level and he is a fair way better than he was last start.”

That would suggest if Krug, and it is a huge IF, he can muscle his way to the front then this is his Derby to lose.

But if he can’t that would most likely mean horses like B D Joe, It’s All About Faith or Shan Noble had got there first and their drivers were willing to roll the dice. That might cost them the race but it could also cost Krug.. and punters.

The most likely sweeper would be American Dealer if the leaders play rough and hard early while Ragazzo Mach trialled on Tuesday and broke 55 seconds for his last 800m so can be forgiven his last start loss.

But so often Derby winners come from the marker pegs and two horses who could end up there are B D Joe first and then Shan Noble potentially getting the lead off the increasingly-confusing It’s All About Faith.

There is little doubt Krug is the best horse in tonight’s Derby and his draw may not matter.

But there is a reason only the elite win both our Derbys, because it is so hard to do and you almost certainly have to be an open class star of the future to complete the classic double.

TOP OF THE TROTS: THESE TROTTERS CAN MAKE YOU MONEY PUNTING INB NZ TONIGHT

1: Bolt Vs Son: Bolt For Brilliance (Addington R6, No.1) appears to hold the aces over Sundees Son (6) in the NZ Trotting Champs because from the one draw he has the option to lead or at least stay in front of his arch rival.

The way they both trotted last start, if Bolt For Brilliance is in front and dialled in then Sundees Son will need to improve two lengths to beat him so the $2.80 bookie quote is very fair.

2: The anchor: Five Wise Men (R8, No.7) has been so dominant over this three-year-old crop this year it is hard to find a horse to beat him in the Trotting Derby.

He has looked all along like he would be even better over distance so the step up to 2600m suits and it is surprising he opened at $2.30 because he will probably start in the red.

3: Manners the key: Both Gaz Man (8) and Call Me Trouble (12) could gallop in race three at Alex Park and that would ruin their chances over 2200m.

But one of them, maybe both, should get it right and if they do one of them should be winning so they make sense as a split bet, probably more heavily weighted toward Call Me Trouble.

4: American Pride (Addington, R10, No.12): Needed the run fresh up and gets Mark Purdon back in the sulky tonight. Has crucial 10m advantage over the other favourites which could make the difference tactically.

5: Temporale (Alex Park, R7, No.6) may face a 20m handicap over 2200m but he only only has four rivals and he did beat Bolt For Brilliance fair and square last start. Small fields can be tricky but with any drag into the race he might be too fast for them as his handicap may really only mean settling last.