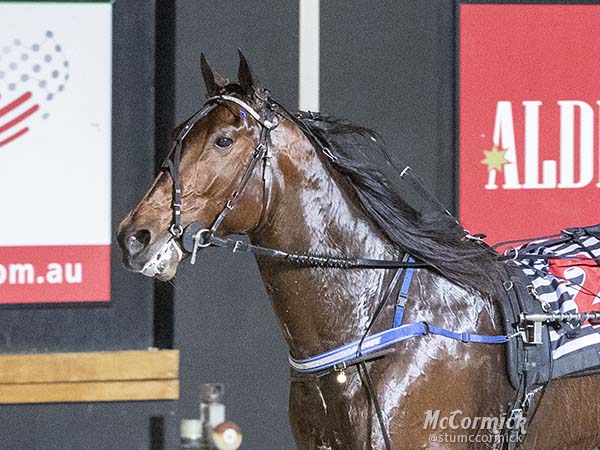 The eyes didn't lie at Tabcorp Park Melton on Saturday night with Ride High's last half lowering the benchmark for exploits at Victoria's home of the trots.

Ride High's 52.7-second last half was the quickest final 800 metres recorded at Tabcorp Park, surpassing the previous benchmark set by Chilli Palmer of 53.4 seconds set in the 2014 4YO Bonanza.

Making the feat all the more formiddable was the fact Ride High was merely allowed to roll along on Saturday night and was never pressed by Frenning nor challenged by a rival, with almost 30 metres separating him from second-placed Our Step Up.

"I didn't pull anything. He probably just knocked off a little bit because he didn't have anything to race," Frenning told Trots Vision post-race. "He's so competitive and such a professional, if he had something to race I'd be scared to see what he could do in the last quarter."

Reinforcing Ride High's prodigious talent is his stranglehold on Tabcorp Park Melton's leading last half performers despite his tender age (five), limited racing (12 starts) and that his record time was set when first-up since December.

Here are the top 10 last halves at Tabcorp Park:

Plugs in and untouched, Ride High resets the record book with a 52.7-second last half in the Vale Rod Osborne Pace.

Chilli Palmer crashes the line to win the 2014 Garrards 4YO Bonanza.

Lochinvar Art and Self Assured have one of the great trots battles in a breathtaking Alabar 4YO Bonanza, which crushes the 1:50 mile rate mark for the first time in Victoria.

Ride High produces the fastest middle-distance last half with victory in the COGS 4YO & 5YO Championship (and how about Hurricane Harley late!).

A much-hyped, star-studded edition of the Breeders Crown three-year-old boys final proves a romp for Ride High who away his rivals.

"The world is his oyster!" Mark Purdon's brilliant stallion Lazarus lured the crowds through the turnstiles and didn't disappoint in winning the Eynesbury Victoria Cup.

Speed machine Hectorjayjay had few peers at his peak, a fact he reinforced in the 2016 City of Melton Plate when he led them a merry dance despite his wide front row draw.

Ideal Scott moves to the front mid-race and holds off Restrepo to win his Breeders Crown heat.

Macha finds the front and holds off some star-studded challengers to win the Caduceus Club Cup.

Lumineer reminded of his prodigous talent by kicking off 2020 with a blistering victory in a great bout with highly touted Demon Delight.