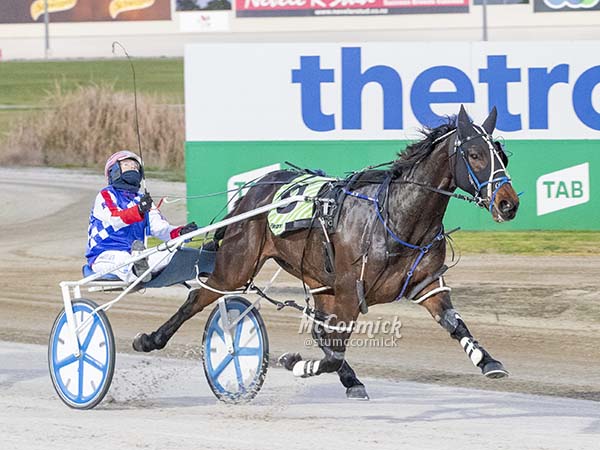 If paying tribute to a loved one can be achieved on the racetrack, then Kate Gath's stunning four-peat at Tabcorp Park Melton on Saturday night was the perfect way to honour her late grandfather John Tee.

Tee, 81, passed away on Friday after a long-running health battle and Gath was able to say goodbye with a brilliant night in the sulky at Victorian harness racing headquarters.

The usually reserved Gath gave a salute to the heavens when she crossed the line first behind Arden Voyager, which made it three wins in succession by taking out the DNR Logistics East Versus West Pace.

She then followed up with victory behind Plan Ce, who is trained by her father Peter Thompson and raced in family interests. Further success with stars Eureka and McLovin completed a treble for her husband Andy and capped off a huge night at the office.

"(Pop) was always a person to acknowledge birthdays and stuff, so he'd always go to the racecaller who was calling and say it's so-and-sos birthday and it used to drive me mad," Gath laughed.

"I hope he was watching because I think he would have been really happy that he was acknowledged in that way and with the connection we both had with the horses, it just seemed fitting really to be able to do that."

Gath has fond memories of Tee, who spent more than 30 years at the Port Pirie Smelter where he worked as a leading handler of the concentrate storage bins.

While it was more of a hobby and passion, Tee also had a rich history in racing both as a standardbred trainer and racecaller of all codes. He broadcast Gath's first career triumph in the sulky all the way back in 2000 with Rxplore at Whyalla, and was able to share the joy of training a horse his granddaughter was able to steer to victory.

"I got home (on Saturday night) and I had like a million messages on my phone. Even from people that you forget that knew pop - everyone nearly knew him from harness racing. Even people like Lance Justice, because they were originally from South Australia, and people like Geoff Webster.

"I forgot how well known he was and the amazing life that he had and career that he had as well. In harness racing, in calling racing in general. He loved the gallopers."

While Gath stole the show in the gig, the performance of Anton Golino-trained squaregaiter Imsettogo was the most impressive by a horse on the night.

After galloping before the start and giving her rivals a huge advantage, the four-year-old mare eventually caught the field and then managed to charge clear in the home straight to win by nearly 20m.