Trotters Derby: Sole filly out to show her Strength in Group 1 Final 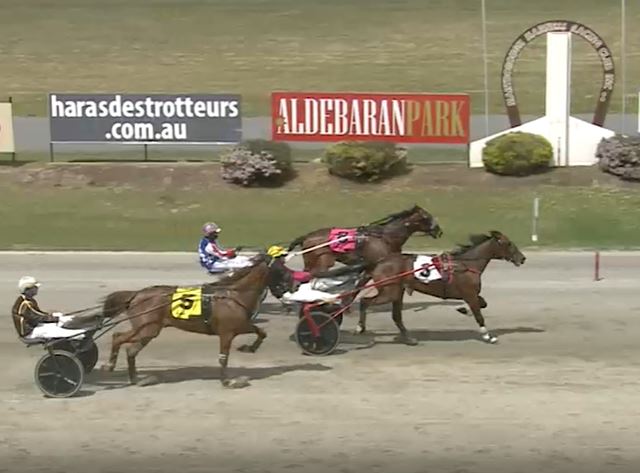 Senitas Strength will look to emulate the feats of Pink Galahs from 2020 and beat the boys in this weekend’s Classic Connection @ Haras Des Trotteurs Victoria Trotters Derby Final.

Mick Blackmore’s three-year-old was the only filly to qualify for the Group 1 clash after a tough display in the opening heat at Maryborough on Sunday.

Driver James Herbertson had the daughter of Muscle Mass outside the leader for almost all of the 2690m trip, and she proved too tough for Central Otago (Andy Gath) and favourite Sweet On You (Patrick Ryan) to win in a mile rate of 2:00.9.

That proved by far the quickest heat success of the afternoon, with Brent Lilley-trained pair Kyvalley Hotspur and Aldebaran Zeus both leading all the way and winning in 2:03.1 and 2:02.5 respectively.

Like Pink Galahs last year, Senitas Strength will be the only filly in the field when she contests next Sunday’s Derby Final back at Maryborough.

The first four horses across the line in each of the three heats won a place in the $75,000 race.

The barrier draw for the elite level contest will be completed Wednesday, with fields available by about 2.30pm.

The mare had the cosy trip in behind early leader Sleepee and pounced in the home straight on the back of a sizzling 27.3 third quarter that left the front-runners vulnerable. In the end, she powered clear to win by 3.7m from Is That A Bid (Michael Hughes) and favourite Majestuoso (Andy Gath), who raced outside the leader and faded late.

SWEET ON YOU (Patrick Ryan)