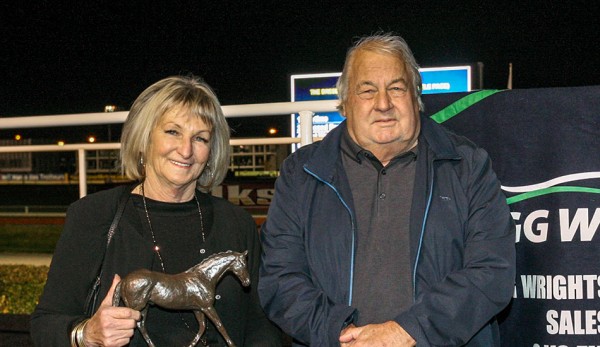 Bill Feiss, the man behind one of Australasian harness racing’s most successful ownership forces, has passed away.

Feiss, the husband of massively successful owner Jean Feiss, died in Melbourne on Sunday at the age of 79 after a prolonged fight with renal issues.

He had been on dialysis for the last three years but his health took a turn for the worse over the weekend and Feiss says she lost her husband of 47 years quite quickly at the end.

“The dialysis treatment for the last three years had really curtailed Bill coming to New Zealand with me, which he always loved,” said Jean.

“He loved coming to see the horses and his trips to Rolleston, going out for coffee and breakfast there.”

Bill, a very successful businessman, was once a licence holder himself, driving horses back in the famous old days of the Showgrounds in Melbourne.

“He was for a while but that didn’t last,” smiles Jean.

“But he always loved the horses, even though for the last decade or so he probably enjoyed them more through me.

“But we had a lot of fun with the horses and on the trips so while it was my name in the ownership Bill was always involved.”

That involvement brought staggering success with Feiss one of the most consistently successful owners in harness racing for the last decade, her dream team headlined by the likes of Self Assured, Amazing Dream and Vincent.

While he was the quietly spoken giant behind the scenes, Bill was hugely popular and respected member of the harness racing industry.

Jean says Bill, also the father of talented horseman Matthew Feiss, is unlikely to be laid to rest until at least next week because of Covid complications with funerals in Victoria.