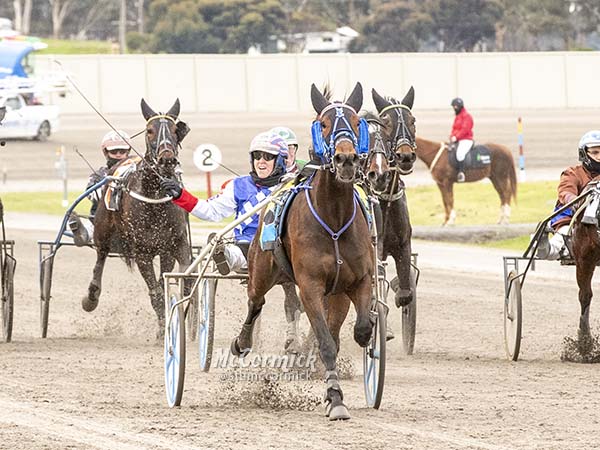 Majestuoso let down with a freakish burst to not only capture the much coveted Haras Des Trotteurs Victoria Trotters Derby but declare himself a star on the rise.

A thrilled trainer Andy Gath spoke glowingly after his three-year-old swept home in blistering style to claim the richest race on the all-trotting card as plenty piled in to Maryborough to soak up Redwood Day.

“It’s been a bit of a hoodoo race for me this race. It’s a great thrill to win it. I’m a little bit emotional actually, I don’t generally get emotional winning big races, but winning this race is a great thrill,” Gath told Trots Vision post-race.

“I just love this little horse. He’s got freakish ability and this is the race we’ve been waiting for. We’ve looked after him all season, just kept him against his own age group. To win this race is quite special, he’ll race in the Breeders Crown and then go for a good spell. The future looks good for him and in 12 months’ time, 18 months’ time he might be challenging Tornado Valley for the best horse in Australia.”

The lofty assessment was shared by reinswoman Kate Gath, who had a brilliant day in the sulky, winning four including a patient drive in the Derby when she and Majestuso overcame losing stride down the back straight to leave all in their wake in the run to the line. 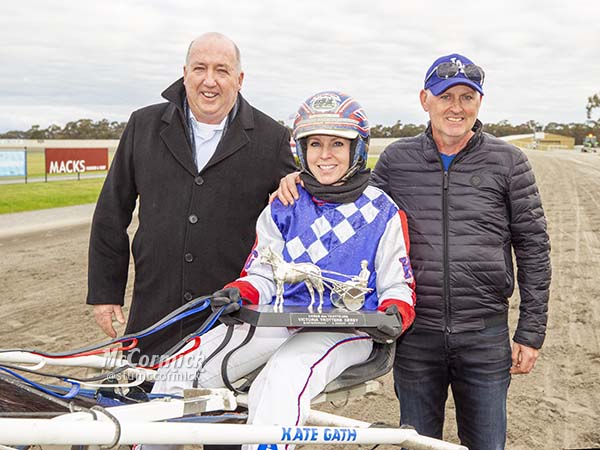 “Up the back straight he galloped for a stride because the one I was tracking up, Sidney (Van Den Brande on Xebec), he got pushed out and they come back in my face and I was like ‘oh no’, but he got down really quick,” Kate said.

“Once that happened we got through the middle and got between them I was confident that he had a pretty quick finishing burst and that they would want to be pretty quick for him not to get them. He just picks them up in a stride. Just rapt.”

The success is reward for the stable’s patience with the talented but troublesome two-year-old, who Kate said had overcome his early cheek.

“He’s just got better with age. He came back as a three-year-old and just put it together,” she said. “He’s matured a little bit, learned how to race a little bit and relax a little bit, I’m just not surprised that he did that today. He is that good and I can’t wait for the future with him as well because, I don’t get excited about too many horses, I’ve been pretty spoilt and got to drive some pretty good ones, but this horse, he’s got everything. He’s just got the biggest motor. He doesn’t get tired and I’m just over the moon.”

The win capped a golden day for Kate, who earlier steered Inter Dominion trotting champion Tornado Valley to victory in the Peter Egan Bi-Rite Electrical Trotters Free For All, Moonlight Dream to victory in the Majestic Son Matchmaker Mile and Magic Owens to a win in the Carisbrook Reserve Trot Final for trainer Norm McVitty.