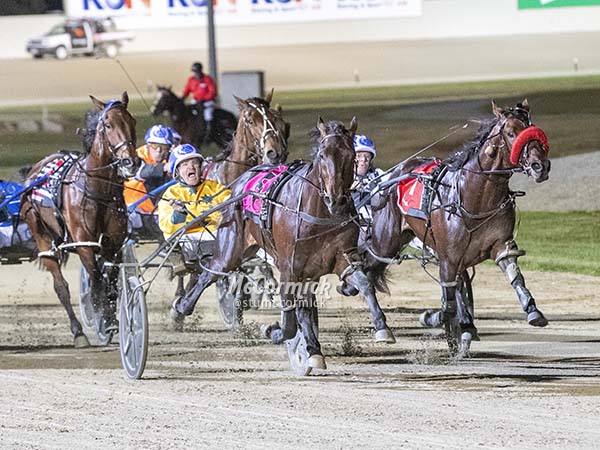 The “perfect horse” Bling It On put in a clinical, explosive performance to win a record-smashing Pryde’s EasiFeed Victoria Cup, capping a stunning comeback story.

The 2017 A. G. Hunter Cup winner has barely been seen since that career-best performance owing to a bad fall and subsequent injury, but though fresh off a 10-month "retirement" and only second up he showed he had lost none of his brilliance in rounding up the Group 1 field.

“He’s such a special horse,” said reinsman Luke McCarthy. “Everyone knows his story by now and for him to come back second up after having that long off and win a Victoria Cup is just a credit to the horse.

“He’s so sound and wants to do it, he’s a beautiful horse, open bridle, no head check, no boots, no tongue tie – he’s just a professional. The trip worked out beautifully tonight and lucky enough he was good enough to finish it off.”

The speed map’s proved true as Cash N Flow crossed Colt Thirty One to lead and placed Bling It On three back on the pegs, while San Carlo worked to the breeze ahead of Buster Brady and Tam Major. 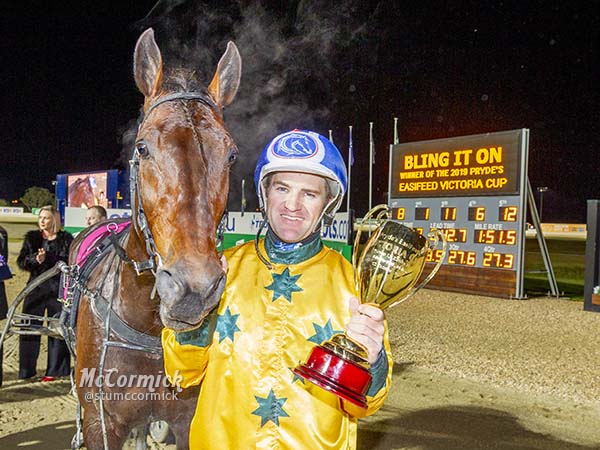 The brisk 42.7-second lead time preceded little respite through the 29 and 28.5-second first and second quarters, and when Buster Brady faded from the running line mid-race the door opened for Bling It On to explode into contention.

Off the 27.6-second third quarter Bling It On ate into the leader’s gap to the final turn, easing three-wide outside San Carlo and by the 100-metre mark he was a length clear and had the race in hand.

Colt Thirty One and Cruz Bromac filled out the placings and San Carlo bravely got over Cash N Flow in his final strides to fill out the first four, but it was Bling It On’s title for McCarthy and trainer Craig Cross. A 27.4-second final quarter sealed a 1:51.5 mile rate record, breaking Lennytheshark’s 2018 mark.

“He’s just an utter professional, just a brilliant racehorse, we got a beautiful run tonight and it just worked out perfect,” McCarthy said. 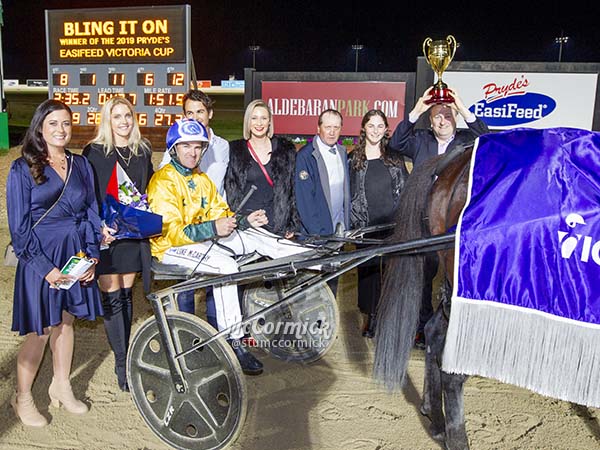 “It’s hard to explain, he’s just such a perfect horse, he’s that smart. He’s getting collected, serving mares as we speak – he got collected yesterday and then jumped on the float and come down for Vic Cup.

“He feels as good as ever. Being an older stallion he should only race into better form through the preparation.”

Bling It On will likely carry plenty of favour as he turns his attention to a New Zealand campaign that will likely include the New Zealand Trotting Cup and Inter Dominion to follow.

Making the win all the more special, the participating drivers wore helmet covers in tribute to reinsman Gavin Lang, who is battling ill health.

With Gavin Lang on their minds drivers provide their own tribute to the great man who is watching online during a tough time. All drivers in the Victoria Cup are wearing the "Gav Cap" #staystrongGav pic.twitter.com/pp44eMYaLj