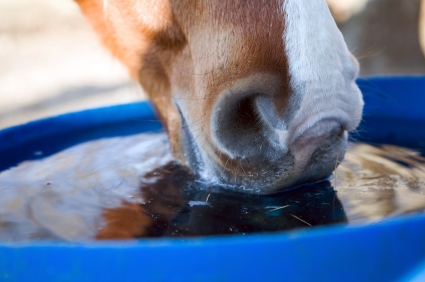 The saying "you can lead a horse to water, but you cannot make him drink" is true, and in this edition of the Integrity Matters' vets report we examine why this is the case with exercising horses.

Electrolytes (body salts) are a fundamental element of every animal's body - none more so than the horse.

Electrolytes play important roles in maintaining the quantity of blood circulating in the horse, transport of vital substances to and from organs and normal function of most body systems.This includes the nerves, the heart, the kidneys, the muscles and the overall electrical "balance" of the horse's body.

There are many electrolytes present in the different fluids inside the horse. The most important ones for normal physiological function are sodium, potassium, calcium, magnesium, chloride, carbonate and phosphate.

The horse's body is designed to keep electrolytes within a very tight balance. Management decisions such as withholding water for prolonged periods, feeding an unbalanced diet with insufficient roughage or inappropriate drenching with concentrated electrolyte preparations can induce fluid and electrolytes changes that the horse's body cannot correct.

These practices may take weeks to months to affect the horse but once evident can be damaging to performance and even life threatening.

What happens if electrolytes are too high or too low?

Electrolyte imbalances induce behavioural, physiological and locomotor disorders. Even mild imbalances will result in less muscle strength and endurance so that performance is impaired.

Heat stress in relatively mild temperatures is more common in dehydrated animals. Physiological dehydration means that there is not only inadequate water but also all the substances that are usually dissolved in that water contained in the horse's body are diminished or out of balance with each other.

This includes the fluids in blood plasma, in and around the body's tissues and even in each cell in the body.

Electrolyte imbalances not only impair heart, nerve and muscle function but also damage cells in many organs including muscles so that recovery from exercise takes longer.

Why are horses particularly vulnerable to electrolyte derangements?

Horses have some specific differences from other animals that make them particularly vulnerable to problems with electrolyte balance:

•    Horses, like humans, rely on sweating and evaporation of that sweat to keep their body in a normal temperature range.  This means they lose a lot of water and electrolytes when exercising.  This is even more of an issue when the weather is hot and/or humid.

•    Horses have a much bigger body mass compared to their surface area, so they get hotter faster than humans. They sweat a lot more to cool down compared to humans. Exercising humans sweat about 2L per hour compared to horses, which sweat at a rate of 15L per hour.

•    Horses have big muscles that produce a lot of heat when exercising. This heat must be removed from the body quickly if tissue damage is to be avoided.

So up to 11 g of important electrolytes are lost in every litre of sweat a horse produces!

•    It takes energy to make this concentrated sweat and contributes to the energy deficit our equine athletes experience post-race.

•    Having concentrated sweat results in a peculiar problem with how horses' experience thirst.

Horses, like humans, feel thirsty when specialised sensors in the brain sense that the sodium concentration in the blood increases.

The drive to drink in horses post exercise is more related to falls in overall blood volume due to the water loss in sweat. If a dehydrated horse drinks only pure water in response to this water loss, the remaining sodium in the blood plasma is diluted even more.

This makes the horse stop drinking before it fully replaces the lost fluid and can leave it chronically dehydrated and depleted in vital electrolytes. Chronic dehydration makes the horse more vulnerable to heat stress and impaction colic.

How do we keep electrolyte balance correct in horses?

Access to fresh clean water is a vital part of maintaining hydration and by extension electrolyte balance. Most electrolytes, except sodium, are present in forage such as grass and hay.

Commercially concentrated feeds will have formulated quantities of vital electrolytes that are listed on the contents label.

Each horse has its own individual electrolyte requirements. It is possible to estimate each horse’s electrolyte needs through a complete dietary analysis and paired blood and urine samples, but the actual amounts needed will change as the horse becomes fitter and workloads increase.

It is not possible, however, to “load” a horse with electrolytes. The horse will expel any excess electrolytes within a few hours of eating or drinking them. It is better to provide enough electrolytes in a balanced formula to cover heavy workdays in the daily ration and allow the horse’s body to self-monitor what it needs within each 24-hour cycle.

Replacing nutrients, including electrolytes, after racing (or fast work when training) is a critical part of racehorse management.

Offering water that has had molasses added is a common practice in harness racing. Providing molasses water may encourage horses to drink after exercise especially if they have been exposed to the practice during training.  Molasses water supplies a quick burst of glucose to the horse but little in the way of electrolytes. It really is horse cordial!

Too much molasses water may stop the horse from drinking enough to fully rehydrate because it contains little sodium. This means the ingested water dilutes the remaining sodium in the blood plasma which, as discussed above, reduces the horse’s drive to drink.

The best way to replace lost electrolytes from exercise is in the feed ration alongside fresh clean water. The feedstuffs make the electrolytes palatable and less likely to induce gastric ulceration.

The electrolytes should be in the same formulation and ratios that the horse’s body has become accustomed to through prior feeding practices. Horses allowed to eat, and drink freely post-race can begin re-establishing electrolyte balance immediately.

What are the signs of electrolyte imbalance?