Champion reinsman Ricky May vows to return to sulky 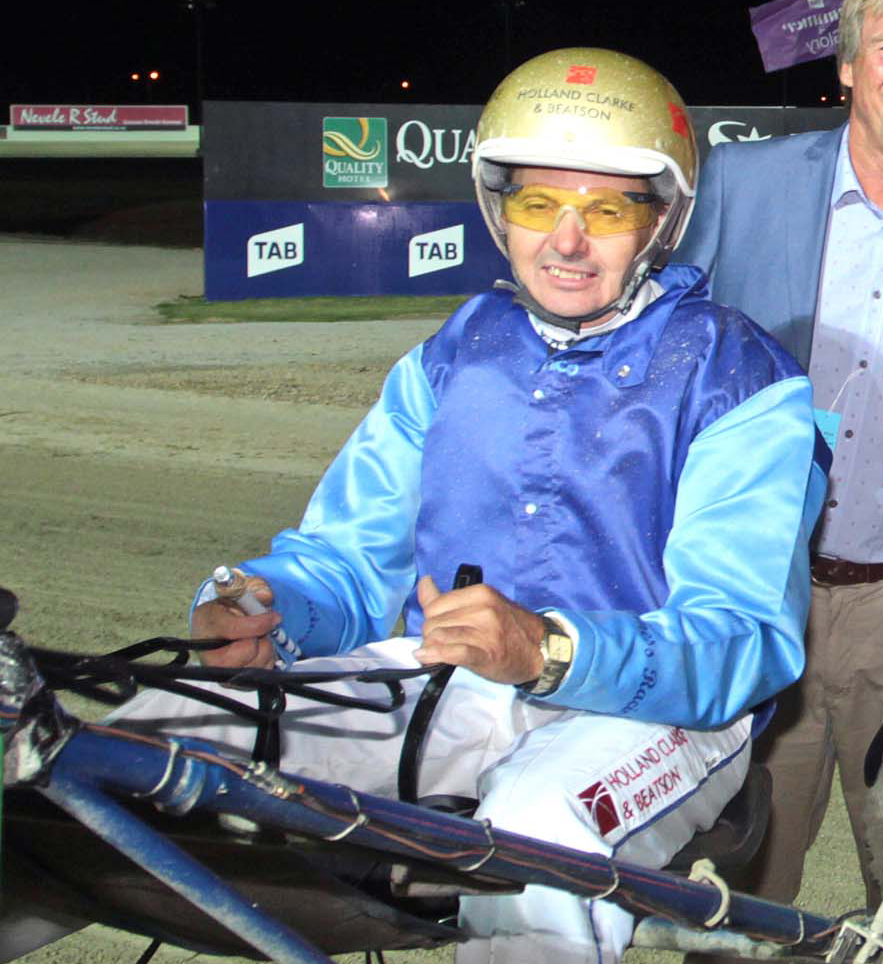 Champion harness racing driver Ricky May can now laugh about the fact he died on live television last week.

He can’t laugh too hard though, because of the broken ribs he got from the guardian angel horsewoman who probably saved his live.

And even after one of the most shocking incidents in harness racing history, May is adamant he will return to race driving.

May stunned the racing world last Thursday when he collapsed in the sulky, falling to the track soon after, when driving A G’s White Socks in the $30,000 Central Otago Cup at Omakau.

His heart had stopped and thousands watching live and on television feared the worst. May says they initially were right. He was dead.

“The doctor in Dunedin Hospital told me later that I was gone,” May said from his Christchurch Hospital bed.

“I don’t know how long for. They reckon it could have been 10 minutes. I don’t remember anything.

“I remember driving a winner earlier (two hours before the incident) and then the next thing I remember was waking up in hospital with all my family there and that was two days later.”

From what the doctors at the hospital and those first to him on track have passed on, May knows when fellow driver and Ellie Barron rushed to his side he had no heart beat.

Barron, a trained physiotherapist, performed CPR on May, working so hard to keep his heart pumping she broke his ribs. She may also have saved his life.

“I spoke to Ellie yesterday and when she got to me I had no heart beat.

“She just took over till the medics got there and used the paddles (defibrillators) on me. To be honest, I think Ellie was my saviour.”

First one helicopter then another came, the second needed because it was equipped with the GPS to navigate through the fog to get 61-year-old May to Dunedin Hospital.

Once stabilised there he was flown a few days later to Christchurch Hospital, where earlier today he had surgery to have a cardioverter defibrillator implanted in his chest.

The device delivers a shock through a wire that runs into a chamber of the heart and May will have it in his chest for the rest of his life in case his heart stops suddenly again.

So what happened to May to cause his to heart stop without warning? His official diagnosis is hypertopic obstructive cardiomyopathy and if you don’t know what that is you are not alone. May doesn’t really either.

It is a sometimes genetic condition that can see the heart muscles thicken even though the heart itself is healthy, even affecting young athletes at the peak of their physical prowess.

May was in shape and very active. He has no warning of what could happen and seconds before the incident was talking normally.

“The doctors told me there was nothing actually wrong with my heart and I didn’t have a cardiac arrest. They actually said I am too fit and the muscles around that area too strong.

“But to honest I don’t know a lot about it. I’m still learning.”

What May knows is that he is alive, to enjoy life with wife Judy and his three children.

“I have a lot of people to thank. Ellie of course, the medics there and the helicopter people, all the staff at the two hospitals and the people who flew me from Dunedin to here.

“So many people have contacted us it is quite overwhelming. And Judy has been a rock.

“But now it is done I want to get back to the farm, even though I won’t be able to work for a while. The boys are taking care of that at the moment.”

The farm at Methven may be home but the sulky is May’s domain, a throne from which he has driven a record seven New Zealand Cup wins among his 2949 winners in New Zealand alone.

He wants that get that number to 3000, maybe more.

“I didn’t think I would want to after the initial shock of it all but now I have had a chance to think about it I don’t want that to be my last race drive.

“So maybe I will travel less, maybe stay a little closer to home but I will go back to driving.”

Less than a week after his heart stopped mid-race and a nation of racing fans held their breath, May can laugh now. The nervous laugh of a man who has been given a second chance. The laugh of the lucky.

“I suppose one day I will want to see the race, to see what happened. But not yet.”

But while he is a husband, father, farmer and friend, May is also inherently a race driver. That can’t be scared out of him.

“You know, I am sure I would have won that race once he (A G’s White Socks) led,” he says wistfully.

In one sentence Ricky May confirms he will be back. You can bet on it.