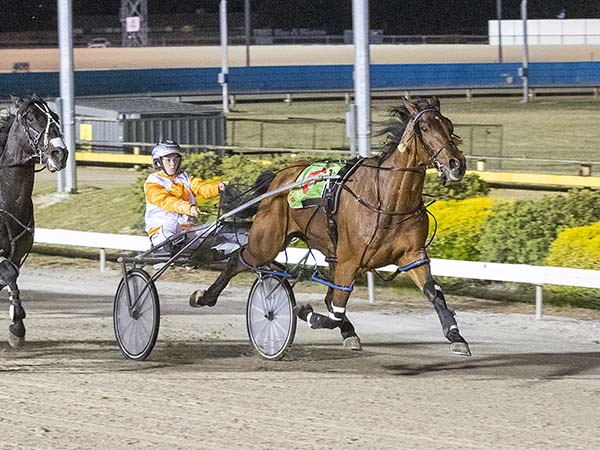 The race for Inter Dominion finals qualification heats up at Auckland tonight and thetrots.com.au's man across the Tasman, Michael Guerin, has delved into each heat to look at the scenarios and betting prospects.

After the gate speed he showed to lead on night one this looks Chase Auckland’s (1) race to lose. He set a national record on Friday and comes into by far the weaker of the two heats tonight.

If he can hold A G’s White Socks (3) at the start then he should win. The latter was outstanding on Friday and should be handy again, with even a small chance of leading, and is the logical threat.

Queensland pacer Colt Thirty One (5) was never a chance coming from last on Friday but is a class horse and it wouldn’t stun to see him go forward hard early, even though he is maybe a better follower. He needs points so could light the race up, but would need to be very quick to cross both those inside him.

Thefixer (12) hit the line really well on Friday and might be coming right, but would need to do something dramatic to win here, with Ashley Locaz (11) in a very similar situation.

If the No.1 leads then My Kiwi Mate (9) has definite first four claims.

Suggested bet: Chase Auckland should win but the start crucial. 1 into 3/5/9/11/12 looks a decent trifecta and First 4 play.

Winterfell (5) was so good on the first night he picks himself. He has been a real trick to follow for the last 18 months but was strong to the line on Friday. He has better gate speed than many realise so could even go close to leading early. His win odds are short enough, but it wouldn’t surprise to see him win with the Inter Dominion often being about who is spot on, which Friday suggested he might be.

Majestic Man (3) sprinted brilliantly late on Friday and if he leads here he will take some catching, but he hasn’t won a race for a long time. He gets his chance to cross the No.1 here so can win.

Habibi Inta (2) was a victim of circumstances on Friday night but hardly hit the line hard, so he needs to step up here. He will need to be faster to lead but should at least sit handy, which has been how he performs best, so expect dramatic improvement.

Massive Metro’s (9) draw looks bad, but with the only other horse in the second line unruly he can get straight away from the inside and be midfield on the outer. He was very good on night one and could be storming home.

Suggested bet: Majestic Man (3) should lead or trail, so gets his chance.

The best heat of the series so far and the chance for the Australians to bounce back. San Carlo (1) is a brave horse with maybe enough gate speed to hold the front, and if he does that should aid Bling It On (9), who could trail him.

If San Carlo runs hard, which is his style, it is going to make it hard for Ultimate Sniper (7), whose best case scenario is probably being three wide to the breeze. He was nothing short of remarkable after being three wide for 1400m on Friday and might still be good enough to win.

Cruz Bromac (8) was also very good on Friday and could turn this race on its head if, and it is a big if, he launches from the outside draw and crosses them all. But his price is short enough. Classie Brigade (5), Mach Shard (3) and Triple Eight (6) are all racing well but their place chances are probably the most realistic.

Suggested bet: Back Ultimate Sniper and save on San Carlo.

Marcoola, barrier one and over the sprint trip, sounds very similar to night one where he was good without being scary good. While it looked like he was crossed easily by Temporale (3) on night one driver Sheree Tomlinson didn’t bustle him then but might let him roll more tonight. If he leads he should win, but the $1.55 is short considering there is gate speed across the front line.

Temporale (3) showed how fast he is early and peaked on his run late Friday, but if he jumps to the front here will take plenty of catching.

NSW trotter Tough Monarch (9) was too bad to be true on Friday, so forgive that and could trail here, but his fate lies in Marcoola’s gate speed.

Paramount King (8) trotted a national record on Friday and had very high gate speed. Whether Joshua Dickie chooses to use it is the question. He may have surprised on Friday but he can win again.