Trots Centre: Beau continues to battle with Jack the riddle 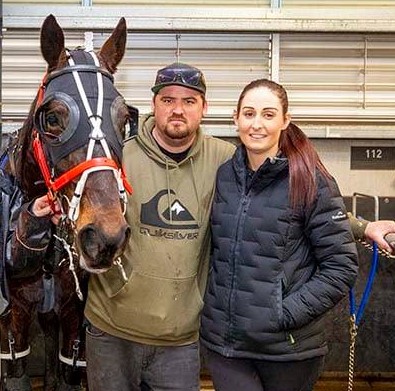 A 54-metre thrashing of his rivals in a faultless trotting display as a two-year-old looked to be the start of a promising career for young squaregaiter Ollie Jack.

But that success in early 2019 seems like an eternity ago for Berringa trainer Beau Tindale, who has been desperately searching for the key to unlock the horse's potential once again.

Since that debut success, the son of Peak has raced 10 times for nothing better than a couple of third placings in Ballarat.

Tindale, who trains in partnership with his wife AJ, said Ollie Jack was spelled after his second run due to serious hematomas in his legs and was not seen again at the racetrack until February this year.

"We couldn't push on after that and so we put him in the paddock and waited for them to heal up and come good," he said.

"He's been a little disappointing since. He's a hard horse because I still believe he's got it. Last start (at Melton) it was a better run for him, but there's still something holding him back.

"Sectionals and times he can run at home, a couple of times there I thought he was pretty well right and he will let me down at the races."

Despite some heavy defeats in his past three outings - by a cumulative total of more than 200m - Tindale is optimistic of his horse's chances in tonight's Terang Co-Op Trotters Handicap.

"I changed a bit of work around with him from his last run and he hasn't raced for a few weeks. I'm pretty confident he will go a lot better this week to be honest," he said.

"I've worked him completely different to how I normally work him, his fitness has improved dramatically and one thing I wasn't able to do before with him was give him the work I thought he needed because he would go off his feed.

"I slowly increased it up to him and gradually got him to where I wanted to be working him and his work last week and going into this race has been really good. I'm just hoping he can run a better race for us."

Ollie Jack is named after the son of owner-breeder Adrian Chattenton, who is Beau's brother-in-law.

The Tindales have two other runners on tonight's card with Spacewriter engaged in the South West Conveyancing 3YO Pace and Rosarito Miss in the Betta Home Living Horsham Pace.

"I'm pretty confident in all three horses that they are fit and ready to run a big race (tonight). We just need a bit of luck in racing," Tindale said.

Began quickly to lead and was able to stroll to victory without being pushed. She has always shown a lot of ability and she looked very sharp in defeating THE GIRLS GOTFLAIR, which trailed her throughout. REPORT & REPLAY

Was extremely impressive, particularly for a National Ratings 57 assessed trotter taking on a harder class. She settled third on the markers, moved to the outside at the 250m mark and sprinted sharply in the home straight. REPORT & REPLAY