Trots Centre: Is tonight the White night for a breakthrough? 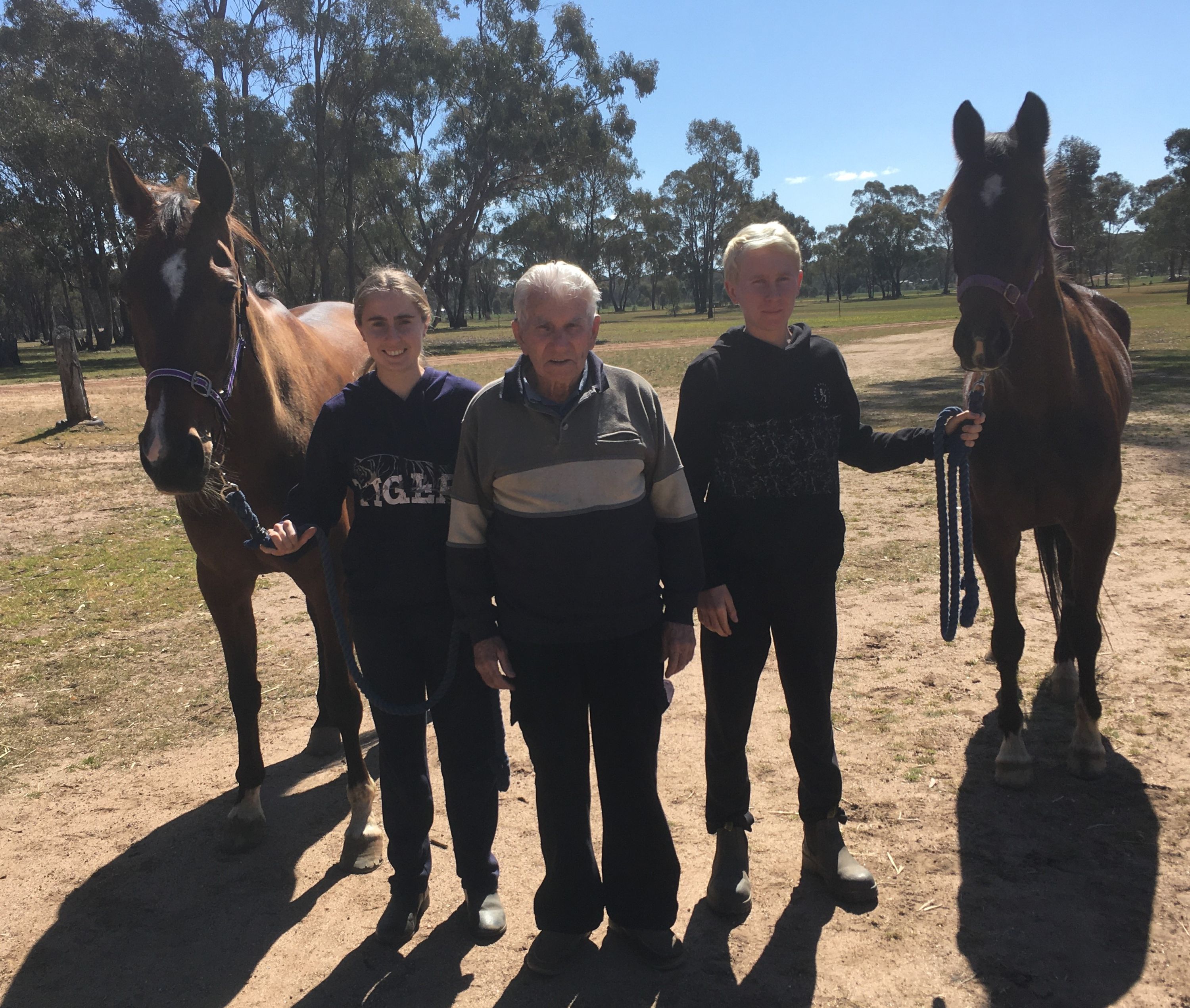 The Whites will be seeing double at Bendigo tonight and the local family’s hopeful good draws may lead to a drought-breaking win.

Full Of Fizz and Double Dot will carry the family’s colours in the Bendigo Party Hire 3YO Maiden Pace, race three on the nine-race card at Lords Raceway, which will stream on Trots Vision at 6.53pm.

The entrants are a collaboration of trainer Bill White (pictured centre), his son/driver Ian White, the latter’s wife Sharon and their kids Lauren (pictured left), 17, and Brent (pictured right), 14.

They will be hoping their hard work at their Wallenjoe Rd property pays off and delivers Bill his first success since Blis Valley won at Geelong on January 22.

“A win would be nice for the whole family,” said Ian, whose hopes were highest for 39-start maiden Double Dot. “The kids just love the horse.”

The Whites share a 60-acre property that backs on to Whipstick State Forest, less than 20 minutes north of Lords Raceway, with Ian buying the property with his parents 35 years ago.

“We have two houses, my wife (Sharon) and I and the kids live in one and my parents live in the other one," he said.

“When we came here it had the houses and a couple of sheds and we’ve built everything up ourselves. We have a jog track up the back and a fastwork track out the front.

“Living on the property is a great lifestyle, on the edge of the Whipstick State Forest, where the kids can go running and cycling.”

And it’s also all hands-on deck when it comes to the horses.

Bill turns 86 on September 26 and Ian said he continued to have his hand in the game, “driving the jogger, feeding and cleaning up”, with help from Sharon and Ian, a school teacher, and their teenagers.

“(Dad) has been involved in it all his life and his father was before him,” Ian said. “It was always just a hobby, but he is one of the few hobbyists to drive winners at the Showgrounds, Moonee Valley and Tabcorp Park.”

Most of that success had come with pacers, but more recently the family has done away with the hopples. Ian's a Victorian Square Trotters Association board member, though it took some convincing to get Bill on board.

“Dad hated them, I liked them,” he said. “It got to the stage where we just couldn’t get our pacers to be competitive, so we tried a few trotters and were lucky enough to fluke a few and have kept going.”

And they’re hopeful to "fluke" another tonight and that either Full Of Fizz or Double Dot can break through for a maiden win.

The camp is more optimistic about the latter, with Double Dot falling just a half-neck shy in her last start and drawing well in gate three.

“We’re hopeful with her,” Ian said. “She has shown the most. We would have thought she would have won a race by now, but she has just got to have things go her way.

And with a good start tonight she could be well placed for a bold front-running performance in the hands of reinsman Rod Lakey.

“I think it reads pretty well. If she gets away hopefully she will get to the front or outside the leader and take some beating.”

Drawn directly inside her is Full Of Fizz, a home-bred by Ian and Susan who is out of their mare Miss Tiny Tot, winner of 13 from 146 starts.

Full Of Fizz hasn’t followed in mum’s footsteps to date, with her 11 starts producing only one placing and her name descriptive of her attitude.

“She is very flighty and temperamental,” said Ian, who will steer the five-year-old mare. “I will try to get to the fence and hopefully will be thereabouts, but she only has a short sprint.”

Produced a big run for second considering he is unraced, (trial winner) IMNOPUMPKIN has won two races to date and the mile rate was a slick 1.56.5. He trailed the leader, moved to the outside with 250m remaining and finished a narrow second. REPORT & REPLAY

August 27: A nicely bred gelding for trainer David Aiken. He was fifth on the markers, used the sprint lane and ran home well without being pushed to produce an eye-catching third. REPORT & REPLAY

September 3: Has been very impressive in several trials and is now with trainer Amanda Grieve. He showed good gate speed to lead, rolled along at a handy tempo and obliterated his rivals in the run to the finish. REPORT