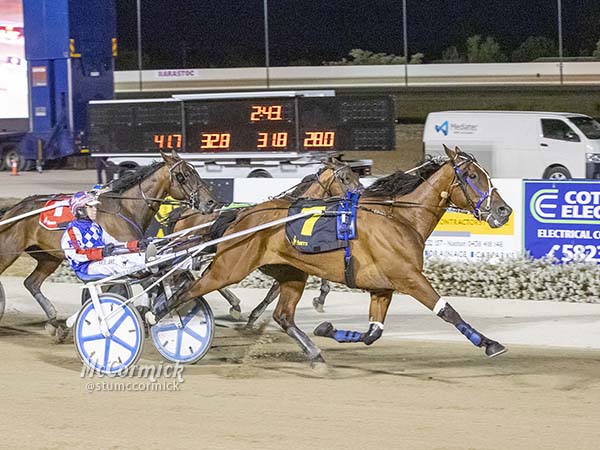 Two Tabcorp Park Melton warriors will lead the Gaths' defence of the What The Hill Great Southern Star, with a fresh-faced Kiwi amid brilliant young talent challenging their grip on the class.

In-form and tough as teak trotter McLovin will kick off proceedings for trainer Andy Gath and reinswoman Kate Gath in the first of tomorrow’s Group 1 heats, which kicks off at 7.22pm.

Then brilliant gelding and reigning champ Tornado Valley, first up since October 10 and winless since March 21, will cross swords with series’ favourite Majestic Man in the second of tomorrow’s heats.

It’s the latter that no doubt enters with the most question marks, with Tornado Valley having lost a little gloss at his last four starts, which followed an extraordinary run of 28 wins from 36 starts.

Nineteen of the wins came at Tabcorp Park Melton and his record at the track over the sprint distance is equally intimidating, having won five of seven.

But the question marks are many, not least of all his three-month absence.

“He worked well during the week and that made the decision for us to race,” driver Kate Gath said.

And she will not be playing it conservatively in the heat, eager to use Tornado Valley’s outstanding tactical speed from gate two to challenge lightning fast beginner Majestic Man, a $1.35 favourite to win the heat and $1.60 favourite for the series.

“It gets down to gate speed,” Gath said. “(Tornado Valley’s) got it. I will definitely hold the front if I can and see what happens.”

And with only the first three home guaranteed a spot in the $300,000 final at 10.22pm there’ll be no taking the foot of the pedal.

“You have to qualify,” she said. “You don’t want to play it safe in the heat and miss out because you were thinking about the final. I’m taking it one step at a time and never get too confident.”

It will be a similar ethos for McLovin, who often has a ‘2’ attached to his name, not because he’s run second but because he’s battled away in the breeze.

That’s been the case in his past three runs and may again in his heat, with Tough Monarch and Magicool among those drawn inside his gate five.

“He’s on the front row, we will take that and hopefully use it to advantage,” Gath said. “It’s not going to be easy. There is a lot of speed drawn inside him, but then he’s so tough and feels in great order. He definitely seems to be feeling terrific.”

Settled last of the four runners, was inconvenienced by the galloping SHEEZ A DOOD when turning into the back straight but came to the outside with 300m remaining and picked up many lengths in the latter stages to go down narrowly. REPORT

Began quickly to lead comfortably and jogged around for an easy victory. She coasted away from her two rivals a long way from home so she didn’t have to be pushed at any stage. REPORT