Trots Centre: From chip off the old block to four-figure winner 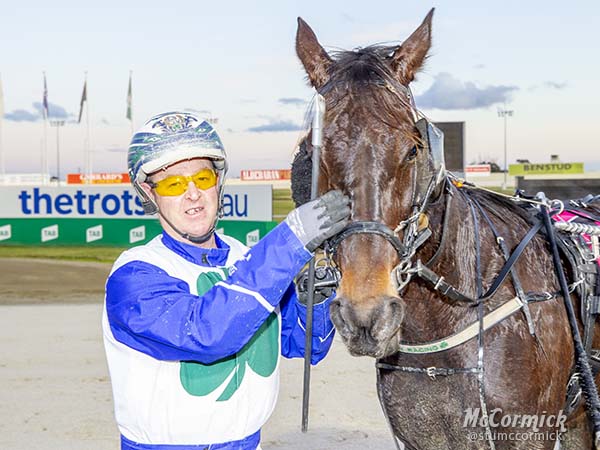 Amid the relentless pursuit for success, David Murphy’s four-figure achievement was a rare moment to stop and reflect on just how far he’d come.

Juliustigres’ victory in race one at Melton on June 20 brought up the 1000th win of Murphy’s training career some 11,127 days since his first, Lochlee Jack.

“It’s a big thing,” Murphy said. “You are ticking along and don’t realise anyone is counting.”

In the midst of preparing four starters for tonight’s racing at Terang, Murphy said the milestone was the result of passion and persistence.

“I have never trained more than 20 at one time, have always just been a medium-sized stable, so it’s been pretty consistent,” he said. “I have been blessed. I’m a spud farmer’s son at a nice property, where dad started training as a hobby trainer.

“I left school in ’86-87, we had four or five horses in work then. The rest of the family thought it was ludicrous leaving school to do this, but I had my heart set on it. To grow it from that to getting 1000 winners without a large amount of horses is a good achievement.”

While he said the last eight years he’d toiled “without really good horses who could win out of turn" things had "picked up a little over the last 18 months and I have a few young ones at the moment who are looking promising”.

The chase of a next big thing continues to be extremely motivating.

“When you take on the job you know you are going to work every day of your life,” he said. “I do enjoy the grind, as much now as when I started. The next good one is just around the corner.”

And, some 30-odd years on, he has refined his plan of attack.

“I hope to get back to the sales more,” he said. “It’s a different age, you can’t wait for someone to give you the horse, you have to get the product and then get people involved.”

Which is exactly what he did recently with a filly by Always B Miki out of Misty Forever, who was bred by Lyndon Turner and passed in at Melbourne’s February APG sale.

“I thought she was a $30,000 filly, but she never got a bid,” Murphy said. “She was a bit immature looking and that can change a lot in a few months. I had another look at her a couple of months later and she had filled out and looks like she can run fast.

“I bought her fairly cheaply and was rapt with the response I got when I advertised some shares in her on Facebook.”

The as yet unnamed yearling is now beginning her journey towards the track and hopefully adding to Murphy’s win total.

More immediate are the four he will float to Dalvue Raceway tonight and Murphy gave Trots Centre readers a runner-by-runner breakdown of their chances:

“She is just battling away at the moment. She hasn’t gone on with things yet. She has a good barrier draw in the mares' race, but there are a few higher ranked off the back row. She has got good gait speed. Brent will try and get her to the first corner as quick as he can and then pick something to hand-up to and try and get to the top of the lane.”

“Leroy’s quite a nice horse. He came to us from Beau and AJ Tindale’s because he was struggling on their bends, but I have finally got him trotting OK. I am just doing different things with his trotting between races and it would not surprise to see him jump to the front and win this, but it is a pretty quality field. I am happy I have got him trotting all the way, it’s a good start, now I’m just trying to see what makes him tick. He is definitely a top three chance if all goes well.”

“This is his second start for us. He sucked us in a bit and I probably ran him too soon and should have trialled him at least once more. He probably wasn’t ready (first-up) and he knocked up and got tired. Since then he had a nice trial and is working well. From the draw he will be up in the firing line and I give him a fair chance.”

“He is going really well. He is at his best when he can lead, he possibly can’t, there might be a bit too much speed inside him. It might be similar to Stawell when he nearly got to the front but not quite. He’s in great order, racing well and will be up in the firing line at some stage.”

La Bet by Bettor's Delight out of La Filou at Cambridge

Parker by American Ideal out of Pepper Potts at Cambridge

Delightful GNP by Bettor's Delight out of Smithes Delight at Addington

Arden Messi by Bettor's Delight out of Tosca Hanover at Addington

Sweet Belle by Sweet Lou out of Belle Tyre at Addington

Fabrizio by Sweet Lou out of Zagami at Addington

Team Kiwi by Bettor's Delight out of Kiwi Ingenuity at Addington

Wandary Muscat by American Ideal out of Wandary Lane at Hobart

A very smart maiden and was able to win her trial by a good margin. She backed up at Terang on Thursday when a big second behind Cover of Darkness, so she is ready to win a race. REPORT

Hasn’t raced since striking trouble at Melton in January. He showed a lot of ability in his two starts last preparation and he might be in for a good campaign considering he won his trial by a large margin. REPORT