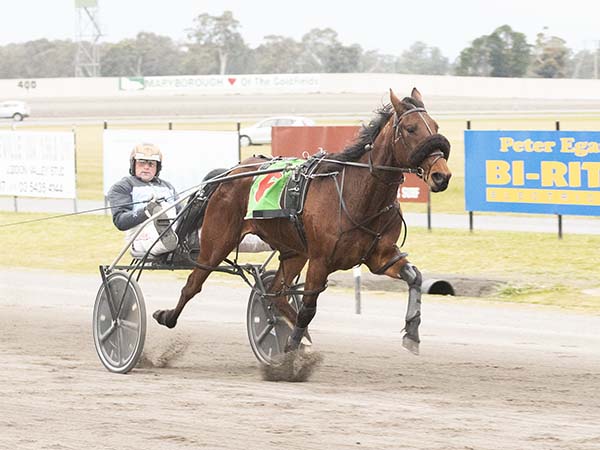 He might not come away with any success, but David Miles has an exciting night ahead at Victorian headquarters on Saturday.

The Monegeetta-based trainer-driver will take a team of five to Tabcorp Park Melton, including top-liners Jamieson Steele (pictured), Enchanted Stride and Emerald Stride for their first-up assignments.

Jamieson Steele hasn’t been seen since running sixth in the Terang Co-Op Pacing Cup in February, a race that closed a successful first preparation with Miles, which kicked off back through the middle of 2020.

While he did compete in the Group 1 Ballarat Cup last preparation – finishing 10th – Miles is hoping the son of Million Dollar Cam can take the next step and become more competitive in those elite level races.

“We haven’t really got Queensland on the radar for him but we just probably wanted to try and put some money in the bank over winter. And then hopefully, fingers crossed, he might step up to Group 1 class at the end of the year,” Miles said.

“He has come back really good and this preparation is probably more to see whether he’s going to be a nice free for all horse or whether he can take that next step to Grand Circuit level.

“He’s a long way off winning a Grand Circuit race, but if things went perfectly and he could improve two or three more lengths, you never know, we might be able to get a run in races like the Victoria Cup and those sorts of races.

“And be more competitive in a Ballarat Cup, Bendigo Cup or something like that, rather than being 100-1.”

Miles said he had been happy with the horse’s trials leading into Saturday night’s Allied Express Pace, but admitted it would be very hard for him to win against a quality field over the sprint trip from barrier 11.

Jamieson Steele will clash with stablemates Pick Up Line and Enchanted Stride, the latter also being first-up from a spell.

Enchanted Stride finished off last preparation with a sixth placing in the Group 1 Vicbred Super Series 4YO Mares Final behind Our Princess Tiffany, after winning a heat at Bendigo.

“She was probably just off towards the end of her last preparation, she just didn’t quite finish off in the (Vicbred Super Series) and the Breeders Crown last year. She probably wasn’t quite as good as she’s been at three,” Miles said about the winner of 11 races and more than $170,000 in stakes.

“But she’s come back great and her trial last Thursday night at Shepparton, she actually beat Jamieson Steele. And the trial before that, both of them trialed behind Struve and Always Fast in slashing time at Melton.”

The third of Miles’ big guns to return this weekend is squaregaiter Emerald Stride, who is fresh up in the Group 3 Hygain La Coocaracha Trotters Free For All.

The 2018 Redwood Classic champion and two-time Group 1 winner last competed in the Australasian Trotting Championship in November when 10th behind Majestuoso, and there’s plans for a trip to New South Wales for the Inter Dominion Championships should things go well this time in.

“She’s just got to make that step out of the top juvenile racing into the open age racing,” Miles said, adding that the daughter of Bettors Delight had also trialed well for her return at Melton.

Saturday night’s 10-race card kicks off from 5.03pm, with Rob Auber and Jason Bonnington in the studio to join caller Dan Mielicki for all the coverage on Trots Vision.

TUNE IN at TABCORP PARK MELTON  on Saturday night

Amazing Dream by Bettor's Delight out of Christian Dreamer at Auckland

Seb's Choice by Bettor's Delight out of Alta Calypso at Kilmore

Ideal Dan by American Ideal out of Jodila at Kilmore

Newsy by Bettor's Delight out of Ultimate Art at Gloucester Park

Ideal BB by American Ideal out of Tartan BB at Invercargill

Smooth Deal by Bettor's Delight out of Linda Grace at Shepparton

Dessie Gee by Sweet Lou out of Genazzano at Shepparton

At Cranbourne early last month, CAPTAIN BELLASARIO was without cover early before sliding to the lead shortly after the start. He dashed home in a very quick final 800m of 56.9 seconds and won by a large margin without being fully extended. REPORT and REPLAY

At Shepparton in late March, TERROR OF LOCKSLEY was an unlucky fourth. He settled five back on the inside, moved into the one out and one back trail at the bell and never peeled to the outside at any stage, going to the line jogging with no clear run. REPORT and REPLAY