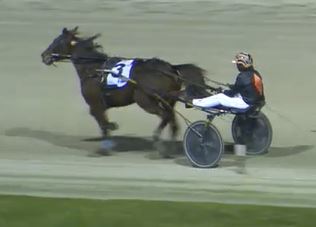 He may have lost his first 20 bouts but Barry Beasley is optimistic Aldebaran Rocky will keep punching away and soon have a 'one' in his win column.

“He’s always racing up in class and has run into some pretty smart horses,” Beasley said. “His day will come. I take them one at a time.”

Aldebaran Rocky has been in Beasley’s stable since being snapped up at the 2017 Australian Premier Trotting Sale, one of two trotting colts the trainer bought with brother-in-law Doug Coxon.

“(Doug) picked them both out of the catalogue,” Beasley said. “He is real keen on the trotters, he absolutely loves them.”

Their first purchase was $12,500 on a Wishing Stone colt out of Le Chabanais, who would go on to become Archleo, now a five-time winner for Beasley who’s pocketed $72,320 in stakes. More on him later.

The other purchase was a $10,000 winning bid on an Eilean Donon colt out of Aldebaran Crumpet, who became Aldebaran Rocky, now a seven-time placegetter who’s knocked on the door with three second placings from his past three starts.

“He hasn’t won a race yet, but he has done all right. He has always been thereabouts,” Beasley said. “He was a bit of a knee knocker early on, so we had a few problems getting him shod right.

“Now it seems that everything is right, maturity has helped him quite a bit. He seems to be going better than ever.”

“I think he is a chance if he starts well, but the standing starts have been a bit of an issue for him. He can mess them up badly at times, but last time he got away and hopefully he will be among them.

“If he runs a place in that company we would probably come home happy. He’s a little better than average, but he’s not the horse Archleo is.”

The latter has been a stable star, running fourth in the Redwood Classic and his two-year-old Breeders Crown final, and then continuing to mix it with the best as a three-year-old.

“He is a very smart little horse,” Beasley said. “He has already raced in eight Group 1 races and hasn’t done too bad, winning a heat of the (Vicbred Super Series) as a three-year-old and running second in the final.”

Archleo enjoyed a lengthy spell at the end of his three-year-old season before resuming in March this year with three consecutive wins, but hasn’t been seen in a race since his April 7 victory.

“He went sore on us after his third start at Terang. We had a lot of issues trying to find the problem and never did.

“I put him in the paddock for two and a half months, he is back in work now and doing fine. He’s come good. He’s probably a couple of weeks off trialling, I am just stepping up his work now.

“We thought he would make a country cups horse, but it’s all up in the air at the moment. We will push on hoping he can win a metro class race and take it from there.”

And there is more quality waiting in the wings.

Beasley and Coxon were again at the sales last summer, purchasing the first Australian Premier Trotting Sales lot, a colt by Used To Me out of Verbier for $11,000.

And earlier in the day made a $6000 purchase at Australian Pacing Gold's Melbourne sale, snapping up a Roll With Joe colt out of Sparks On Nudgee.

Both yearlings are coming on well.

Beasley said the Used To Me trotter was “a really nice type”. “He broke in very nicely and is very promising at this stage.”

And he is “very happy” with the Roll With Joe pacer, who is “getting over the ground very well”. “They have already had one prep, I will get them back in shortly and see how they go.”

American Alli by American Ideal out of Beris Holmes at Ballarat

Stag Party by Bettor's Delight out of Surprise Party at Addington

Escalera by Bettor's Delight out of Tuapeka Maddy at Albion Park

American Sweetheart by American Ideal out of Crystal Reign at Cranbourne

Mozasu by Bettor's Delight out of Marine Maguire at Hobart

Settled fifth on the markers, got a long way out of his ground and finished hard for an eye-catching fourth in what should be a strong form event. REPORT & REPLAY

Defeated a small field and the mile rate was slow but he is bred to be a handy horse and he did look nice in coasting to the line under his own steam. REPORT & REPLAY