Trots Centre: Will the Bomb go bang at Melton? 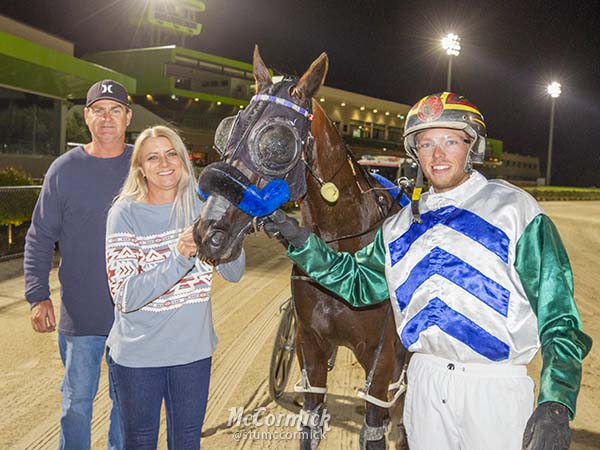 Is this the week Bettor Be The Bomb explodes?

It was one of the key conundrums put to the horse’s regular driver Jack Laugher during this week’s edition of Burning Questions, with the young reinsman offering a good insight into his likely tactics for this Saturday night’s assignment at Tabcorp Park Melton.

Basil Dooley’s seven-year-old has been respectable without looking like a winning chance in any of his six starts this campaign, but gets a great opportunity for success after drawing gate two in the Become A VHRC Member Today Free For All (2240m).

He’s up against a nice field of rivals including the airborne Torrid Saint (Julie Douglas), Boy From Bondi (Wayne Potter), Sirletic (David Aiken) and Triple Eight (Jess Tubbs), but is well fancied by punters who backed him into a $3 favourite by Friday afternoon.

“Last week at Kilmore is probably the best he’s felt for me in a while – he felt sharper,” Laugher said.

“I did ask him to come out of the gate a little bit and he got out okay.

“This week we have drawn two. Love In A Chevy, who is inside of us, I wouldn’t really think would want to be getting into a war with anyone off the front row, so if I had my way we’d be handle bars down into that first turn and making sure that we led.

“A lot of what I do sort of does depend on whatever Basil wants to do on the night, but I think this week, it’s got to be this week if he’s going to do it.”

Bettor Be The Bomb was a major success story last preparation, with Dooley’s charge winning four races at Melton - including the Group 2 Casey Classic - before a ninth placing in the Hunter Cup.

When asked if it was fair to label Better Be The Bomb just a rung below the heights he reached last campaign, Laugher said it was.

“I think that’s a fair assessment,” he said.

“Before he went into the Hunter Cup he won that Casey Classic going 52.8 (mile rate) over the middle trip. I don’t think the horse that has come back is capable of doing that yet.

Injured trainer-driver David Miles sat in on the Trots Vision coverage at Melton on Wednesday and gained widespread adulation for his insights. He passes the reins to fellow horseman Steve Cleave, who will form part of the panel alongside Rob Auber and caller Dan Mielicki this weekend.

The TAB Jane Ellen (Group 3) for the mares and VHRC/Aldebaran Park Benefiting Our Members Winter Trotters Cup Final (Group 2) are among the headline races on the Melton card.

TUNE IN at TABCORP PARK MELTON on Saturday night

AMAZING DREAM, by Bettors Delight out of Christian Dreamer, winner of the TAB Blacks A Fake Queensland Championship at Albion Park on Saturday.

LIGHTNING JASH showed very good gate speed to lead clearly. He ran along at a rapid rate and scored in a mile rate of 1.55.9. He is undefeated in two Tasmanian appearances and will be strongly fancied at Melton tomorrow night. REPORT and REPLAY

ITS BACK IN THE DAY settled five back on the markers, moved into the one out and one back trail at the 800m and was out three horses wide on the home turn when he was able to produce a big finish to score over DIAMOND PARTY. He wasn’t fully extended so it was an impressive display. DIAMOND PARTY set up a genuine tempo in the lead and her National Rating is 41 points lower than the winner’s assessment so she did a great job to finish a close second. REPORT and REPLAY