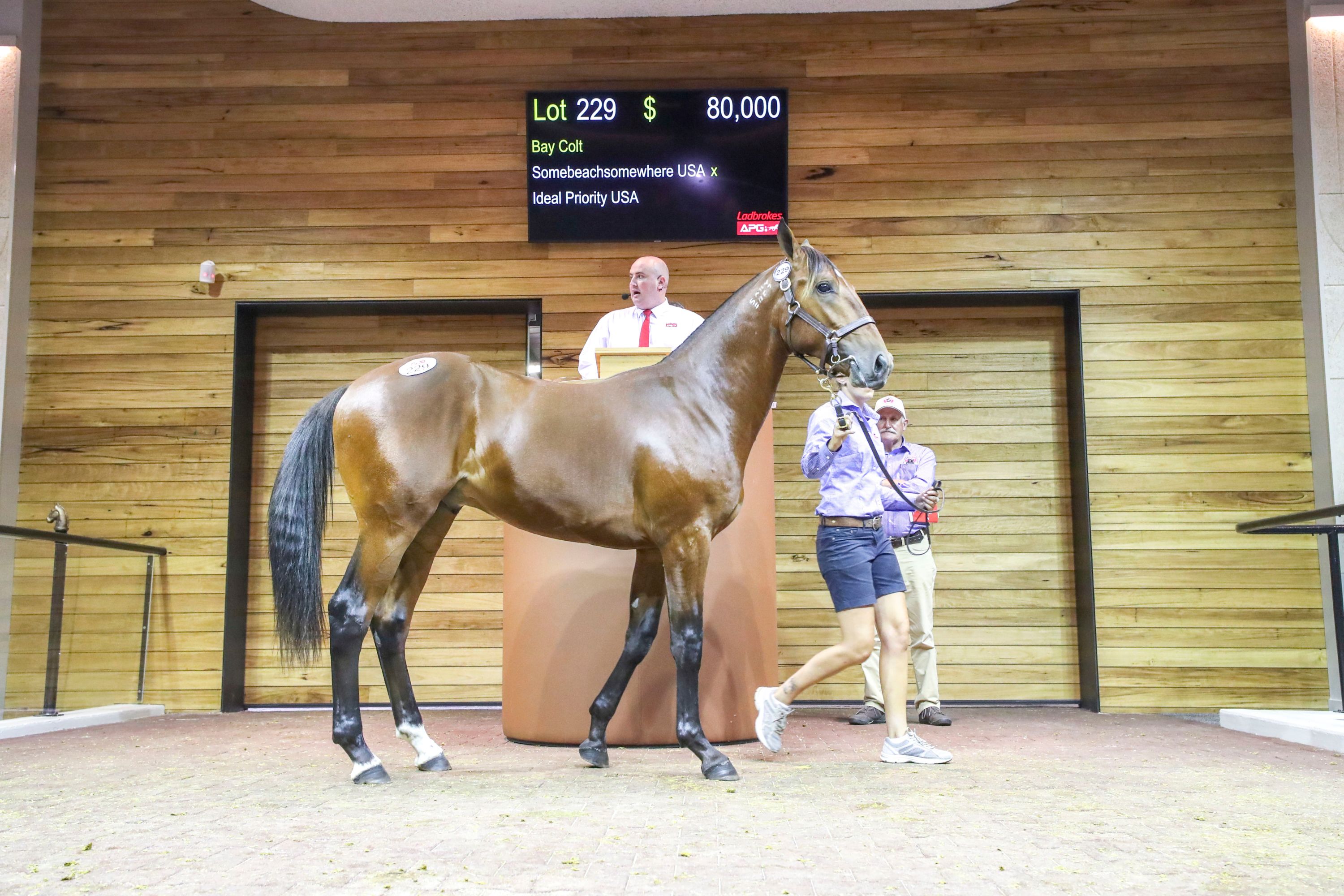 The adrenaline kicked in, the hand kept going up and Tom Hogan walked away the much-coveted sale topper, whose talented family inspired the late bidding frenzy.

It was a full-brother to brilliant Victorian filly Petacular who prompted the bidding war, the Durham Park bred Somebeachsomewhere colt catching the eye of Hogan and Clayton Tonkin, partner of trainer Emma Stewart.

“Breeding was the main thing,” Hogan said. “Clayton and I had look at him, walked him up many times with his farrier and vet, and then went back and had another look at him. They couldn’t fault him.

“His breeding, he has great conformation, he’s a yearling but you could have passed him off as a two-year-old. He was the clear pick of the sale. Clayton had no hesitation in recommending him.”

His full-sister, Petacular, sadly had to be euthanised in November 2017 after breaking a cannon bone while spelling, prematurely ending a career that yielded 19 wins and $454,083 in stakes for trainer-driver Michael Stanley.

“Petacular and Miss Graceland had some battles but she was number one,” Hogan said. “If she didn’t break down she would still be number one. It’s unfortunate she is gone early, she was going to be a household name.

“We went overboard (at the sale), but that can happen when you are waiting two and a half hours. The adrenalin gets you going. I’m hoping for a big two-year-old season, because the family and friends are not going to be happy with me if I’m wrong.”

His partner, Sue Murray, will hold 20 per cent of the horse while her brothers-in-law and their three sons will also grab a slice, the first time the latter trio have ventured into trots ownership.

“I’ve been going for the last 10 or 12 years and buying horses at the APG for family and friends and fitting them in and they all get a kick out of it,” Hogan said. “I’m really happy. All of the owners are excited, in footy terms they’ve walked away with a number one draft pick.”

For a more modest $35,000 Hogan also snapped up a Bettors Delight colt by The Waratah, having the previous year brought his half-brother, who was sired by Art Major.

“His brother will trial in three weeks and he goes all right,” Hogan said. “He’s the pick of the two two-year-olds we bought last year.” 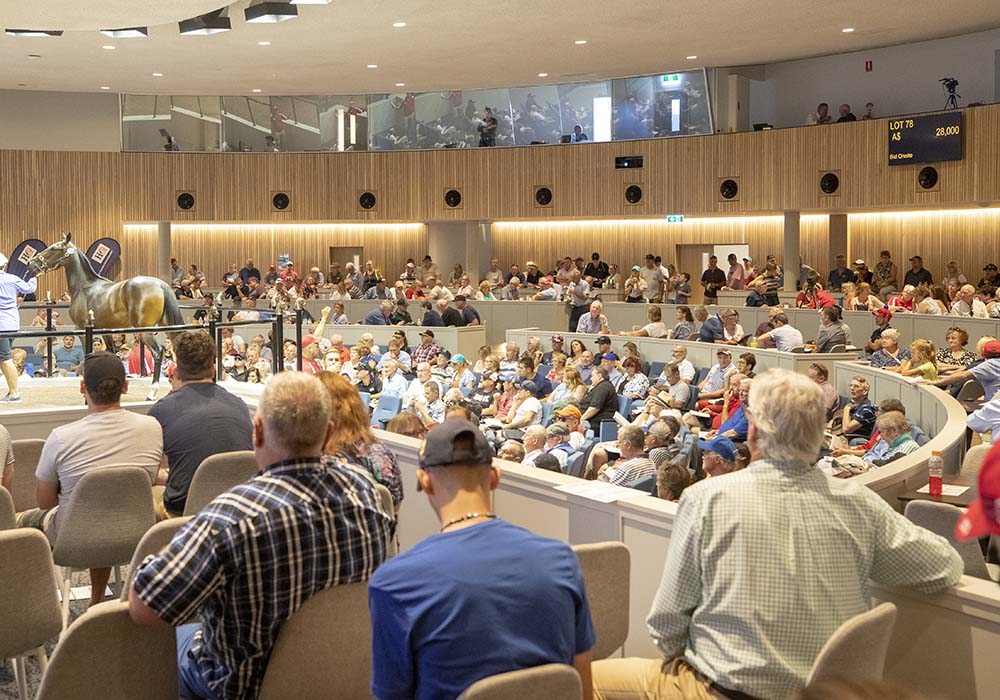 They stole the headlines but there were many dreams pursued on Sunday as owners chased the next big thing only a day after watching Tiger Tara claim the Del-Re National A. G. Hunter Cup.

A Somebeachsomewhere colt out of Dreams Of Heaven drew $95,000, with his new owners hoping a similar career to full-brother Menin Gate, winner of $574,758.

David Moran and Laura Crossland’s in-form stable was prolific purchasing four, including a $70,000 Captaintreacherous colt out of Always Target, a half-sister to Milly Perez, and a $50,000 Rock N Roll Heaven colt out of Timely Loch. The latter is a half-sister to Just Irish Lock, the dam of Rock N Roll Heaven filly Shez All Rock ($426,350), who had a breathtaking three-year-old season.

2016-17 Victorian VHRSC owner of the year Danny Zavitsanos swelled his stable with two purchases, including snapping up a Durham Park filly for $40,000. She is by American Ideal out of Camluck dam Magic Z Tam, a half-brother to Tam Major ($125,500). He also topped the bidding at $50,000 for a two-year-old by Somebeachsomewhere, who was the second foal out of Repelem, a half-sister to three-year-old Revolt.

Fellow owner Kevin Riseley has enjoyed plenty of good horses and was drawn to Alabar’s Bettors Delight filly, who he purchased for $30,000. She is the second foal out of lightly raced Maid For You Lombo, a Sportswriter mare who’s dam was none other than Tailamade Lombo, winner of $1.3 million

The Go Racing Syndicate, which has the likes of Cant Refuse, Hectorjayjay and King Of Swing among its number, put the hand up for a Rock N Roll Heaven filly whose dam, Manellira, is out of Amarillen. The latter’s foals include Nostra Beach ($236,080), Miss Graceland ($224,458), Villagem ($626,585) and Pixel Perfect. While Pixel Perfect was unraced, all five of her foals produced six-figure stakes including Soho Tribecca ($1,103,374) and Carlas Pixel ($475,128). 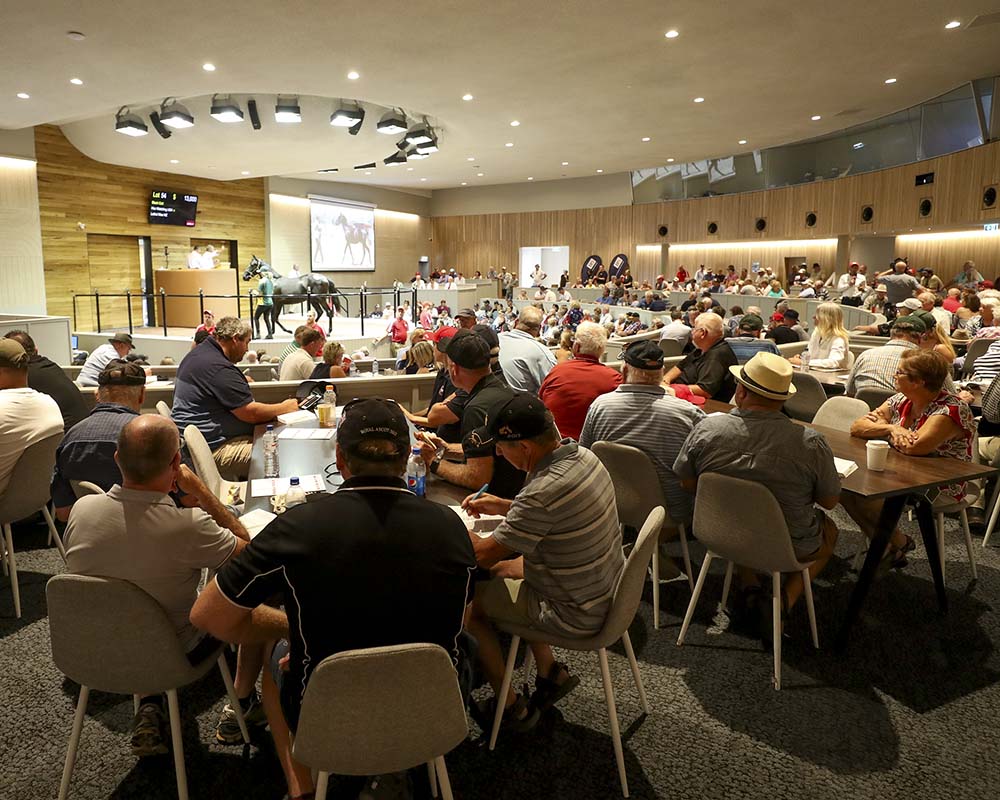 Justin Baker was again prolific at the sales, with his purchases including $80,000 for a Somebeachsomewhere filly out of Perfect Life. Part of Peter Gleeson and Bruce and Craig Cameron’s lines, the filly was a half-sister to two-time Southern Cross Series winner That’s Perfect. The dam, Perfect Life, is a half to Beauty Secret ($425,921) and Major Secret ($464,872). Barker also paid $75,000 for an American Ideal colt out of Smouldering Desire, with the dam a half-sister to Inter Dominion and Hunter Cup winner Smolda.

Also prominent were New South Wales based trainers, with Tim Butt, Rickie Alchin, John McCarthy, Blake Fitzpatrick and James Rattray each snapping up lots sired by Captaintreacherous among their purchases.

Rhiannon Park mare Slip Slop Slap produced reigning Victorian Horse of the Year Jilliby Kung Fu ($526,710) in 2012 and so her Captaintreacherous colt attracted $70,000. A key juvenile rival of Jilliby Kung Fu was Our Little General whose half-sister, Someone To Love, had A Rockndoll Dance colt sell for $44,000.

Florida-based Victorian trots owner Marc Hanover and Gordon Banks purchased lots 130 ($41,000) and 135 ($78,000), the latter a Captaintreacherous colt out of The Baggy Green, a winner of $108,700 in race stakes, whose dam was multiple Breeders Crown winner Lady Waratah.