Trots Centre: Bonanza winner pulls back on the Boots 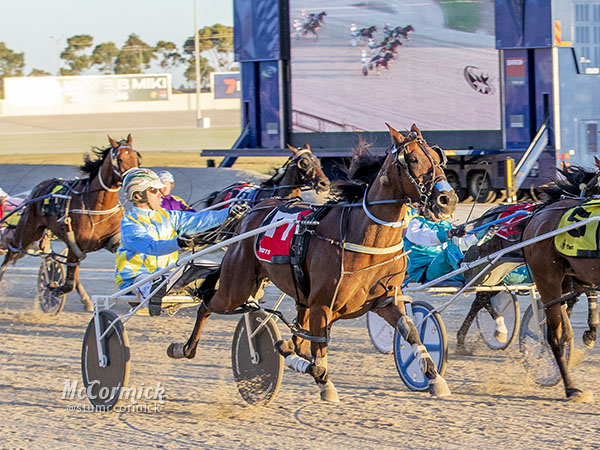 Boots Electric probably wasn't touted by many as a Group 1-winner in waiting last preparation, but he produced his best when it counted to claim an elite level victory during a magical start to 2021.

The rapid rise through the ranks capped off a great campaign for trainers Anthony Butt and Sonya Smith, with a slashing victory in the 4YO Bonanza at Tabcorp Park Melton followed by a more-than-creditable effort in the Chariots Of Fire at Menangle on February 20.

The son of Somebeachsomewhere was given a brief freshen-up after that run - the 18th of a busy racetrack career that only started in July 2020 - with plans afoot for more feature race success.

"You always hope they keep improving like this and he has. I think over the next 12 months he will keep getting better and better too."

Boots Electric resumes in Saturday night’s Nutrien Equine Yearling Sale 10th and 11th April Pace at Melton, where he must overcome an outside back row draw over 2240m to win.

If he performs well, Butt said a tilt at the Group 2 SA Pacing Cup on April 17 looks a good goal for the five-year-old, who has already won more than $120,000.

Zac Phillips is fresh from Group 1 glory with Just Hope in last weekend’s Gold Tiara Final at Bathurst and will take the drive on Boots Electric with Butt in Tasmania for the feature meeting at Launceston.

The weekend’s Melton card is highlighted by the Alabar Vicbred Platinum Home Grown Classic finals for the three-year-old fillies and also colts and geldings.

The races are Group 2 events and follow heats that were run at Bray Raceway in Ballarat last week.

The return of champion squaregaiter Tornado Valley will also keep trotting fans glued to the action until the last race of the night at 10.30pm.

The Andy Gath-trained multiple Group 1 winner hasn't been seen since his failure in the TAB Australian Trotting Grand Prix on February 27, but can close in on the magical $1 million prizemoney barrier with success in the TAB Uncle Petrika Trotters Free For All.

Krug by Bettors Delight out of Champagne Princess at Addington

Arden's Horizon by Bettors Delight out of Arden's Rose at Addington

The Darling by Sweet Lou out of Perfectly Poised at Bunbury

Antonia by Bettors Delight out of Perfect Penny at Bathurst

CK Spur by Pegasus Spur out of Jazmin Alicia at Melton

Go Mary by Pegasus Spur out of Margann at Waimate

Malabar Spur by Pegasus Spur out of Malabar Hanover at Pinjarra

At Melton on March 16, HY LEINVINCIBLE dashed to the front in the early stages then finished off in a sizzling final quarter of 26.92 seconds to win by a large margin. REPORT and REPLAY

At Melton on March 22, JAWSOFLINCOLN (Art Major – Lincoln Room USA) trailed the leader early, moved to the outside at the 900m markers, hit the front with 500m remaining and was run down late. REPORT