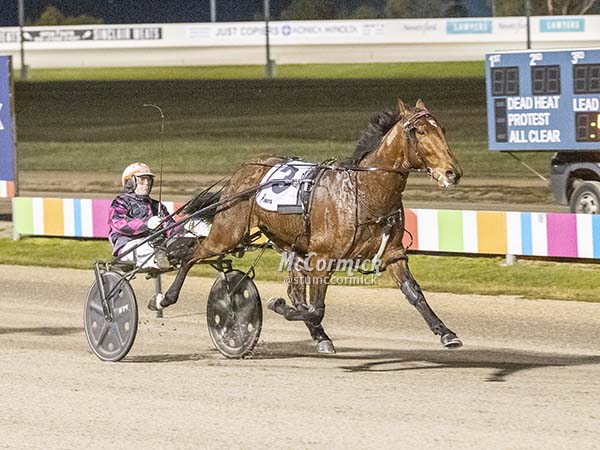 Champion reinsman Chris Alford believes he needs to hold a forward position with Tam Major if he is to be a chance of success in Saturday night’s Pryde's EasiFeed Victoria Cup.

Alford will join forces with the Emma Stewart-trained up-and-comer, who tackles clearly the biggest assignment of his career so far.

Tam Major, a winner of 14 races including the Group 1 Vicbred Super Series final for four-year-old entires and geldings in July, has drawn barrier three for the $250,000 feature at Tabcorp Park Melton.

Rated a $16 chance with TAB.com.au, the son of Art Major will start outside fancied runners Colt Thirty One (barrier one) and Cash N Flow (barrier two).

“It’s probably not too bad,” Alford said of barrier three. “He can get out good without being brilliant so a lot will depend on whether the two gets across the one and I can just slide straight across with him or not. Otherwise I’m going to be doing a fair bit of work early.

“We are probably just going to have to try and get forward and hopefully not too many keep going forward outside us and we don’t get shuffled too far back.”

Tam Major heads into the Victoria Cup on the back of an eye-catching third in the Jet Roofing Kilmore Pacing Cup on September 26 when he charged home from back in the field.

“I’m pretty sure it will be a pretty fast lead time and a solidly run race, but sometimes when you think that it doesn’t happen,” Alford said.

“He came from sort of last in the Kilmore Cup and ran third and that was his first sort of test at that grade and he did a good job.

“I’m sure he’s good enough, if things go his way that he can win, but I don’t think he will be able to do all the work and win like he did in the sires stakes or the Breeders Crown.”

Alford doesn't believe he can lead the Victoria Cup field with Tam Major.

“I don’t think that either of those two (Colt Thirty One and Cash N Flow) would want to hand up to him anyway, because it’s probably his first real try in the big league,” Alford said.

Alford felt Colt Thirty One would potentially be driven to take a sit behind Cash N Flow in a bid to put Bling It On three back on the fence from his barrier eight draw.

“If Colt Thirty One led, I doubt he could cop a lot of pressure and still win because he’s not the toughest horse in the race,” he said.

“We saw that when he got beaten a couple of times in Queensland… he’s more of a speed horse.

“So I doubt he could cop sustained pressure and have Bling It On sitting on his back.”

Alford said the Craig Cross-trained Bling It On, who won first-up from a long break at Tabcorp Park Menangle on September 28, was the horse he’d be siding with if not involved in the race himself.